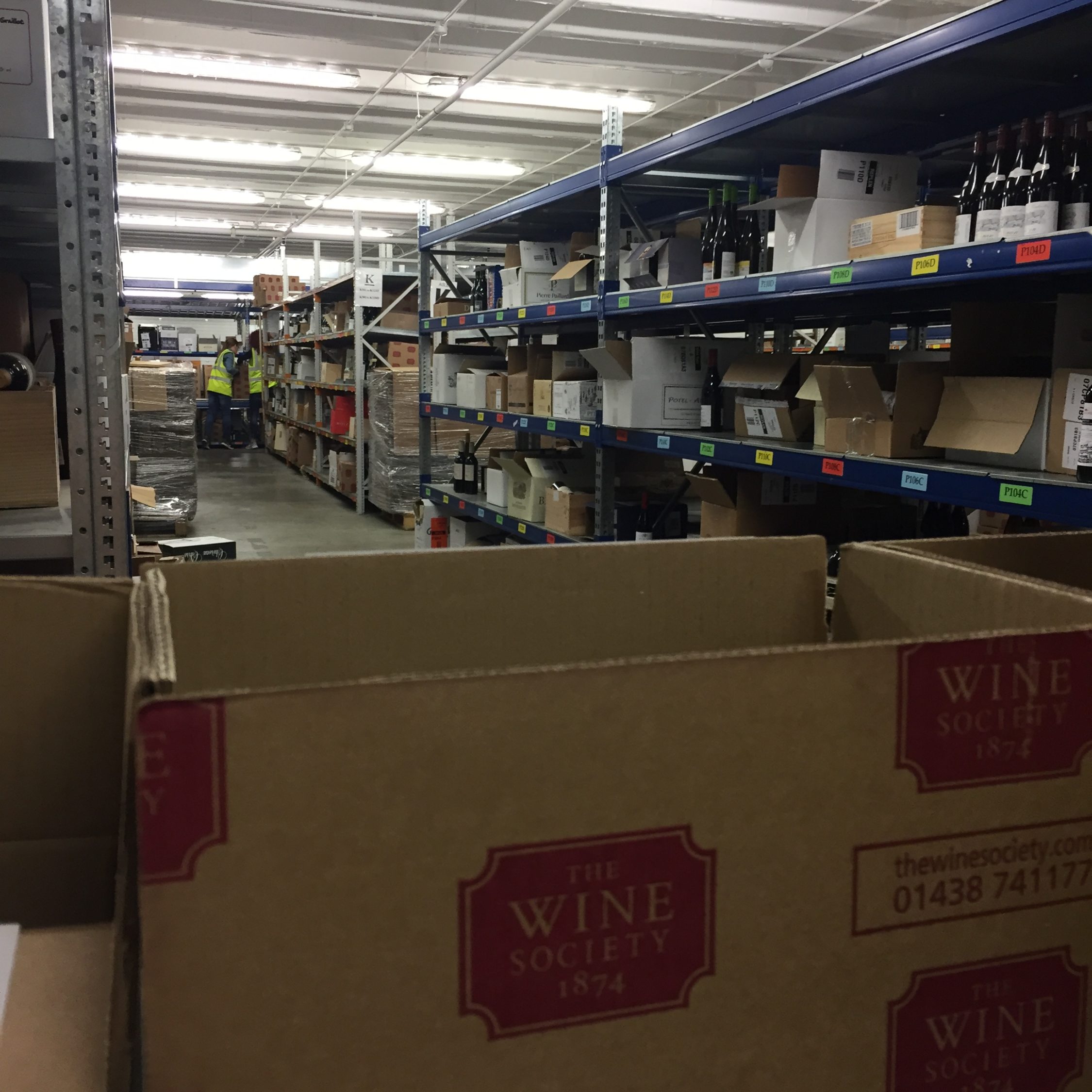 My day as Charlie in the Chocolate Factory

When you were little, you almost certainly read ‘Charlie and the Chocolate Factory’. If you’re younger than me, or have your own Oompa-Loompas, then chances are you saw the film, or the stage show too? Well I’ve just had my own version of what young Charlie must have experienced, looking around The Wine Society.

Home to Britain’s oldest wine club is an unprepossessing complex of buildings spanning a few decades that architecture clearly forgot. A damp day in Stevenage has echoes of the opening titles of ‘The Office’, but pass through the doors and everything changes.

Stevenage was Britain’s first post-war New Town. The International Exhibition Co-operative Wine Society Ltd, to give it its full mouthful, goes back a lot further, to the last of the Great Exhibitions in 1874. The Royal Albert Hall hosted the event, with its cellars packed with casks of (mostly Portuguese) wine for punters to sample and, hopefully buy. It was an inauspicious start, as most of those who attended the event gave the basement a miss. The wine lake resulting from the disinterest of the Great British Public posed a problem – and, happily, gave birth to the Society. Having managed to flog the casks, through a series of jolly good lunches, the founders realised that they were onto something and established a mutual organisation, to buy from growers and sell to members.

A lot has happened since – the shift to bottling in place of origin, the road network, the 1965 move to Stevenage, the development of New World wines, and the internet – but the Society’s status as a co-op, run for its members, remains the same.

I have been a customer since 1993, when a great friend gave me my ‘share’ in the Society as a 21st birthday present. In those pre-web days, ‘the list’ – a little book the size of ‘Animal Farm’ – was the only way of choosing what to buy and it was my first foray into the wonderful world of wine. It remains a lovely thing to flick through (apparently many members choose to do this in the bath), to whet your wine appetite. This blog is all about ‘things to try and why’ and I think the list (now generally viewed online) is a brilliant embodiment of that mantra. 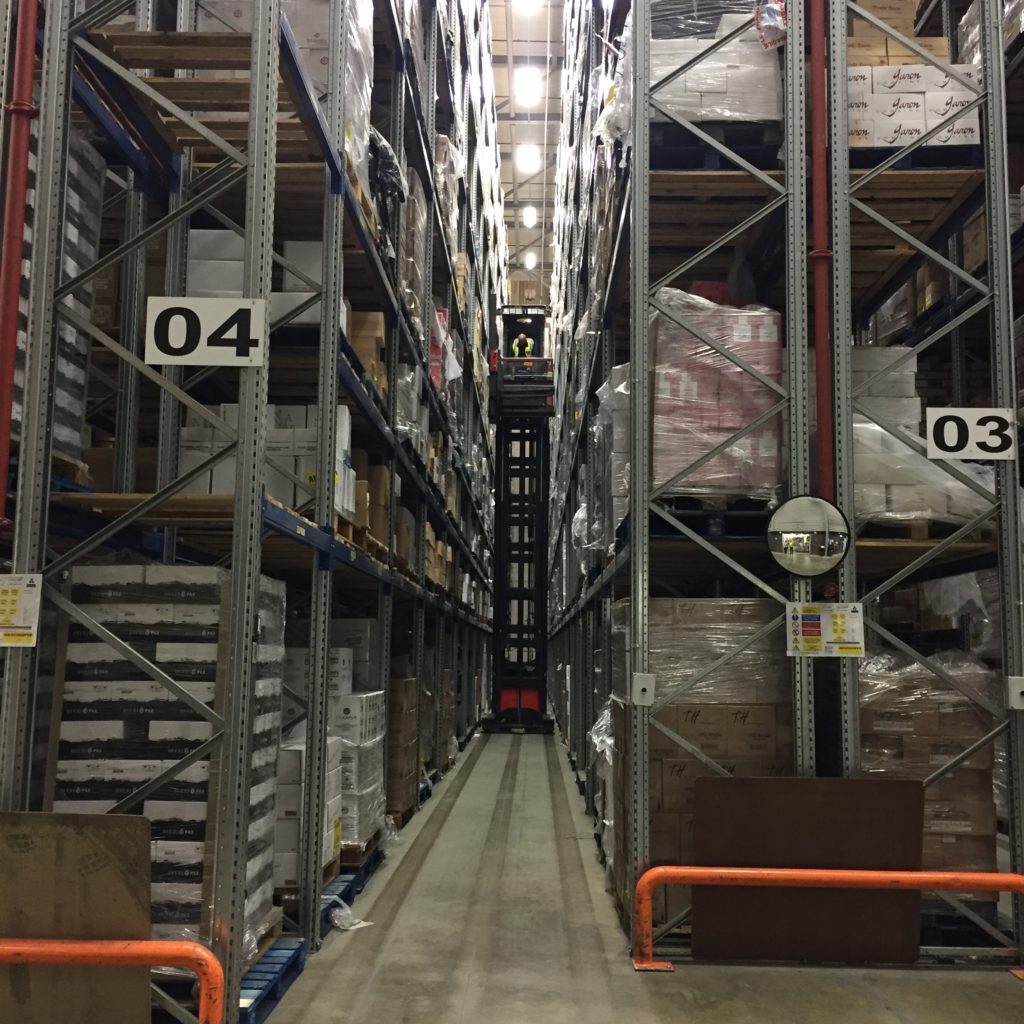 The Wine Society’s evolution and its embrace of the modern wine-buying world is very much in evidence at its Stevenage HQ, which appears to have had a bit added on every decade or so (there’s a bus depot behind which is earmarked for the next phase of expansion). The building isn’t underground, but the distinctive smell and the lack of natural light give a subterranean feel. Pallets of wine tower above you, like a Manhattan in wood and cardboard. Purpose-built forklifts (they need to be heavily counterweighted) dart around beeping occasionally, but otherwise it’s oddly quiet in the ‘Members Reserves’ – the temporary home for wines purchased ‘en primeur’ (for those not in the know, this means buying wine before it’s bottled and released to the market, which usually means better value for those prepared to pay upfront and be patient). 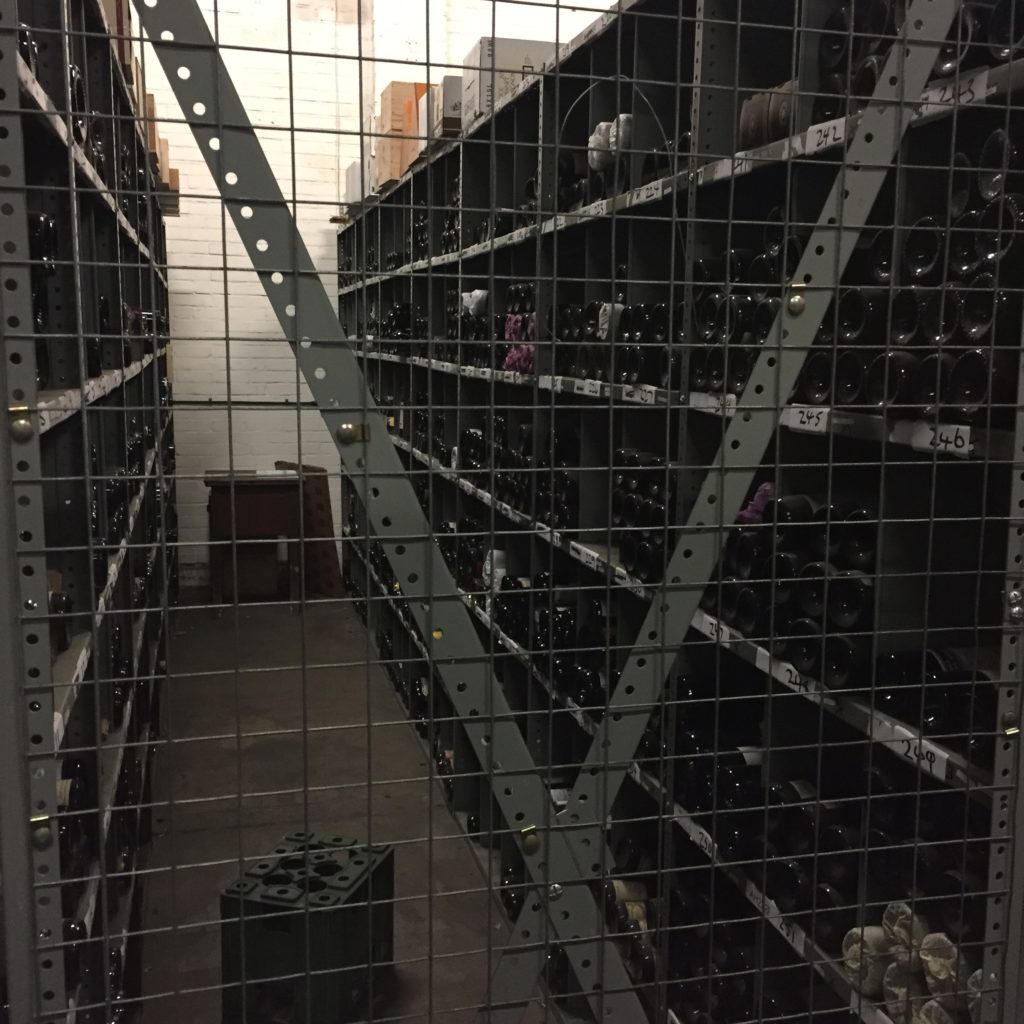 Historically, each member had the equivalent of a locker, with their share number written above a bin (see the picture above). With an active membership of 136,000 such a system would clearly be impractical these days, so wines are now stored together, with a computerised system allocating whose is whose. Next door to the Reserves is another warehouse, constructed from eco-friendly hempcrete, housing the Society’s impressive range of around 1,500 wines – ranging from budget blends to classic Classed Growth Claret – for general sale to its membership. These wines are hand-picked from a maze of bins, loaded onto a network of conveyors and then shunted off into sidings, which correspond to the delivery routes the Society’s fleet of vans take around the country. Most members will get to know their delivery driver, because they each seem to have their own ‘patch’. Waiting in for a delivery is, of course, the bane of modern life, so the Society is currently trialling ‘click and collect’ for those who want it.

The standard of service is really very good

Unsurprisingly, the majority of purchases happen online these days, but there’s still a busy call centre upstairs. Staff get WSET (Wine and Spirits Educational Trust) training to help them deal with a range of enquiries from the simple (“where’s my delivery?”) to the sophisticated (“what will be best with my Bouillabaisse?”). As a long-standing customer, I would say the standard of service is really very good, which is just as well when you consider that, as a mutual, the institution effectively belongs to us.

So what are we buying? Well it would appear we’re a pretty conservative bunch; The Society’s White Burgundy is number one, followed by its Claret. Third place is, perhaps more surprisingly, the Sicilian Reserve Red, followed by the Montepulciano d’Abruzzo, Rioja Crianza and Cotes du Rhone – all of them its (good quality) own label.

Aside from a few modest ‘special offers’ and the occasional bargain bin end, The Wine Society doesn’t generally discount its wines, relying instead on the loyalty of its members, the breadth of its range, and its consistency of quality and service to support its growth. There are challenges ahead; what Brexit will mean for wine imports is yet to be worked out, the Pound is weaker and alcohol duty has continued to rise above the rate of inflation – all of which has pushed up prices of late.

The Society can still seem a bit stuffy and exclusive, but beneath those slightly fusty corks, there is an exciting range of thoroughly modern wines (I was lucky enough to have a personalised tasting session focused on my interest in organic and biodynamic  – more on that to follow). It’s much like another favourite of mine, the department store Liberty of London, which has managed to preserve and celebrate the best of its heritage, while moving with the times.

And, if you’ll excuse the pun, the future looks rosé; membership is increasing, there seems to be a greater understanding of the benefits of ‘mutuality’, sales are rising year-on-year, the range is being developed to keep up with the trend towards lighter wines, and the Society is plotting another expansion of its physical footprint.

As I left that vision of vinous heaven behind, blinking into the drizzle, I was reminded of those final words in Charlie and the Chocolate Factory about what happened to the man who had everything? He lived happily ever after. The Wine Society is pretty special and deserves to do the same.