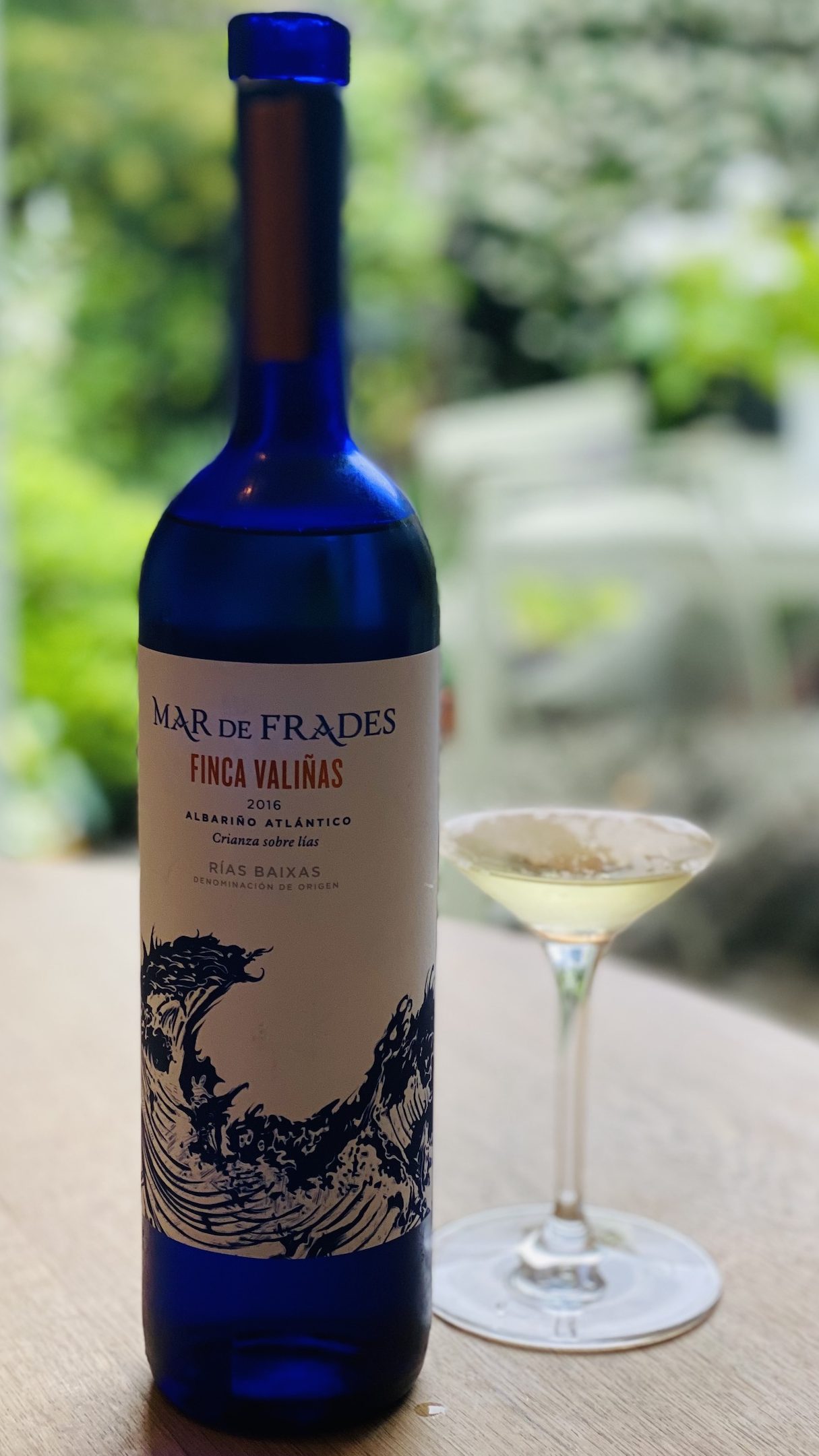 It’s no secret that Mar de Frades Albariño Atlantico is one of my personal favourites. Few wines I have recommended on these pages have enjoyed quite such a response. That distinctive blue bottle might sometimes rattle traditionalists, but the sheer quality of what’s inside it is never questioned.

To describe its creator, winemaker Paula Fandiño, as a restless innovator would actually be an understatement. Whether it’s the region’s first sparkling Albariño, innovative temperature sensitive labels, new methods for keeping oxygen away from the fermentation process, or experiments with granite tanks, she never stops.

For her latest challenge, Fandiño is taking on climate change. Alarmed by the rise in average temperatures – one degree warmer over a timespan of just over 30 years – she has not only instituted a series of sustainability measures but is also aiming to futureproof production, with an expansion inland and upwards.

“the future for the region”

The Rías Baixas resemble fingers, pointing into the Atlantic off Spain’s Galician coastline. Historically, Salnés has been the epicentre of the region, with its intricate patchwork of small plots accounting for two thirds of production and three quarters of the wineries. The maritime climate is temperate and most of the land is just above sea level, which poses a challenge as temperatures rise. Ultimately, if nothing is done about global warming, one day red wines could even replace the likes of Albariño and Godello.

Though Mar de Frades buys grapes from a network of more than 200 growers, it also owns vineyards and the top wine in the range comes from a single vineyard plot in Salnés, Finca Valiñas, where the winery is also located. The vines, planted in 1975, actually predate the brand, established 12 years later, and even the appellation itself, so they bring some proper age quality.

Though Finca Valiñas will continue to reign supreme at the top of the portfolio, it will soon be joined by another single vineyard wine, Finca Monteveiga, from an inland river valley, Ribeira do Ulla, further north, at an elevation of 160 metres.

“Ribeira do Ulla is where I see the future for the region,” says Fandiño, who explains that the climate is more continental, with a combination of morning fogs and the increase in altitude keeping temperatures cooler. The soils are different too, with schist, rather than the granite and sand that dominates at Valiñas.

To give us a sense of what’s in store and how it might complement the portfolio, Fandiño treated us to a vertical tasting of recent vintages from Finca Monteveiga, to compare alongside the classic Finca Valiñas.

The small bottle tank sample of the 2017 Mar de Frades Finca Monteveiga, to be launched next year, offered similar vibrant citrus notes to the Valiñas, but also richer stone fruit character, with apricots, ripe peach and some tropical pineapple. The younger vintages, 2018 and 2020 were a little fresher and tighter, as you’d expect, though the latter is already shaping up really well.

By comparison, the 2016 Mar de Frades Finca Valiñas (£31.50 per bottle, or £28.50 if you’re buying a case, at Great Wine Co), offered summery wafts of honeysuckle, tangerine, yellow apple and candied lemon, with firm citrus acidity, lovely texture from contact with the lees (yeast cells) and, of course, that wonderful sea breeze salinity in the finish.

Drawing a parallel with Riesling, Fandiño told us she believes the ageing potential of Albariño is underappreciated, so to prove her point we also tasted a 2014 example of the Finca Valiñas, a classy, textured wine, by no means at the end of its life, offering intricate layers of preserved lemon and bruised apple charm.

To ensure its own house is in order, Mar de Frades is aiming to reduce carbon emissions, water, waste and energy use by 20 percent by 2023 using the latest technology, and is also reintroducing some distinctly old-fashioned farming methods in the vineyards, including cover crops and grazing sheep, outside the growing season.

As much as it was a real pleasure to taste the single vineyard wines, it is also obvious that Fandiño and her team have a bigger mission: blending in these new inland plots, alongside the grapes from Salnés, to ensure that the winery’s flagship product, the wonderful Albariño Atlantico, continues to shine.

You can read more about Mar de Frades and its wines here.