Möet & Chandon is the world’s best-selling Champagne brand, but it’s vintage sibling is less well known. Perhaps that’s because the hero product is non-vintage, blending in reserve wines to deliver something classy and consistent, year after year. Buy a bottle and you know exactly what you’ll be getting. Where as, with the vintage, it will depend upon that year’s harvest conditions.

I love vintage Champagne, not least because I revel in that variation from one harvest to another. Throw in the fact that, some years, there’s no vintage product at all, because the grapes weren’t good enough and it feels even more special. Although it is early days, 2021 might be such a year, as the weather conditions thus far have been really tough.

The new 2013 Grand Vintage Extra Brut and its rosé stablemate are described by the accomplished Möet Chef de Cave, Benoît Gouez, as “a classic vintage”. So what does he mean? 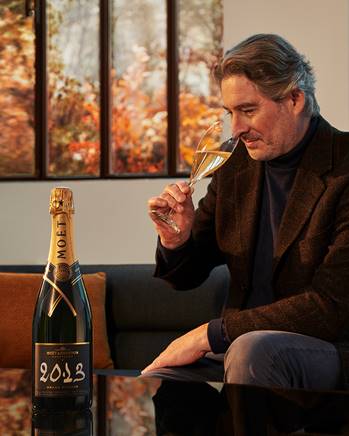 Showing us a series of charts from the Comité Champagne, Gouez explained that 2013 was a cooler year, with average temperatures closer to those in the 1960s. Budding was late, as was the harvest, which began in early October, the latest start since the mid 1980s. Consequently, the balance of alcohol and acidity was also akin to that seen decades ago, hence the description ‘classic’, evoking vintages of the past.

“Vintage is freestyle, it offers us freedom, it’s about character,” says Gouez, contrasting it with non-vintage, “It’s not that one is better than the other. One is rational, the other is more emotional. Vintage has to tell the story of the year.”

After the late start, the story of 2013 was a happy one, most especially for Chardonnay, which shone in the cooler than average temperatures, the later harvest inspiring thoughts of the changing seasons.

“I use three words to describe 2013,” says Gouez, “Autumnal, energetic and chiselled. There are aromas of ripe autumn fruit, apples and pears, not the apricots or peaches of 2009 or the ripe citrus of 2012.  There are also brown aromas, of the forest and roasted chestnut.”

“We knew that the Chardonnay was ripe and clean, so it was obvious that it would play a major role in the blend. Pinot brought us a special chiselled quality of structure. It’s not massive Pinot Noir, it’s like Roman architecture with lots of detail and finesse. Classically, the Meunier brings the bridge between the two and brings some fleshiness to the mid palate,” he adds.

Disgorged in December 2019, the new 2013 pair were supposed to be released at end of 2020, but we all know what happened next. Gouez believes the additional time in bottle has been beneficial. Both releases are Extra Brut, with dosage – the ‘liqueur’ of wine and sugar added at the end of the production process – of around 5 grammes per litre, reflecting the quality of the fruit.

How do they taste?

Möet & Chandon Grand Vintage 2013 (£77 at good wine merchants and Clos 19), Möet rosé is never shy, or retiring, and neither is this. There’s a smack of bright red fruit on the nose, with cherries and berries, complemented by a beguiling savoury spice note. Structured and well defined, this is a serious food wine, with pithy pink grapefruit in the finish. Enjoyable now, I would be keen to try this again in five years, to see how it has developed.

Both new releases come highly recommended and, dare I say it, the Extra Brut is actually really good value, when you consider what you’re getting.