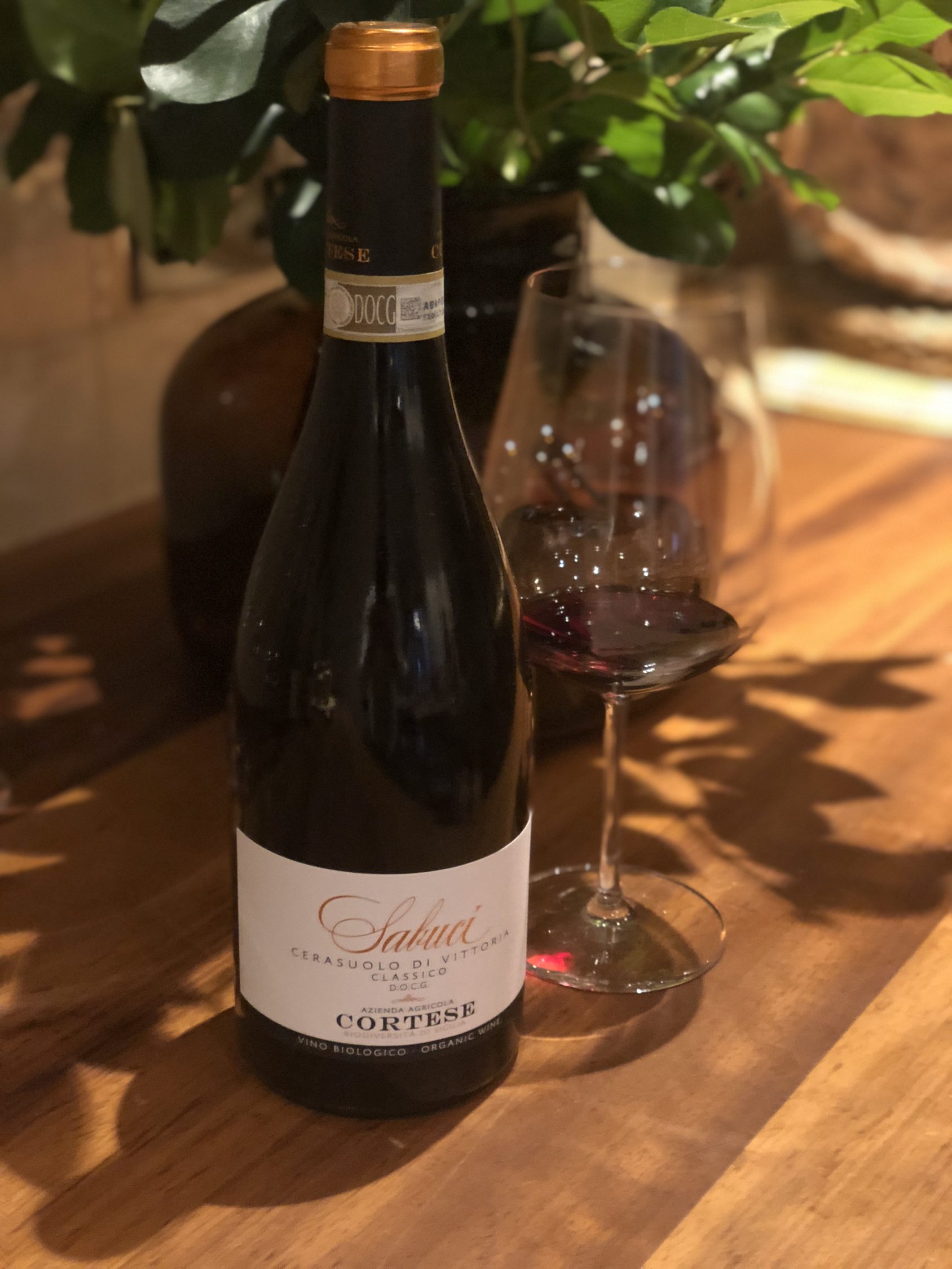 This is a piece I originally wrote for The Buyer on some new wines coming to the UK market. I promised I’d update it when the wines had a UK stockist and they are now for sale online at Slurp

Not so long ago, Sicily’s illustrious winemaking past seemed to be conspicuously at odds with the present: Italy’s second largest producer of wines, the vast majority of its production was basic bulk juice, destined to flood into Europe’s wine lakes. Since the turn of the Millennium, so much has changed: Sicily’s wines are once again winning critical acclaim, its unique terroir is gaining special status and its exquisite indigenous grapes are being celebrated the world over.

Sicily is back in the game, thanks to a band of producers who have taken the qualities that set the island apart and worked tirelessly to demonstrate that great wines can be made there. 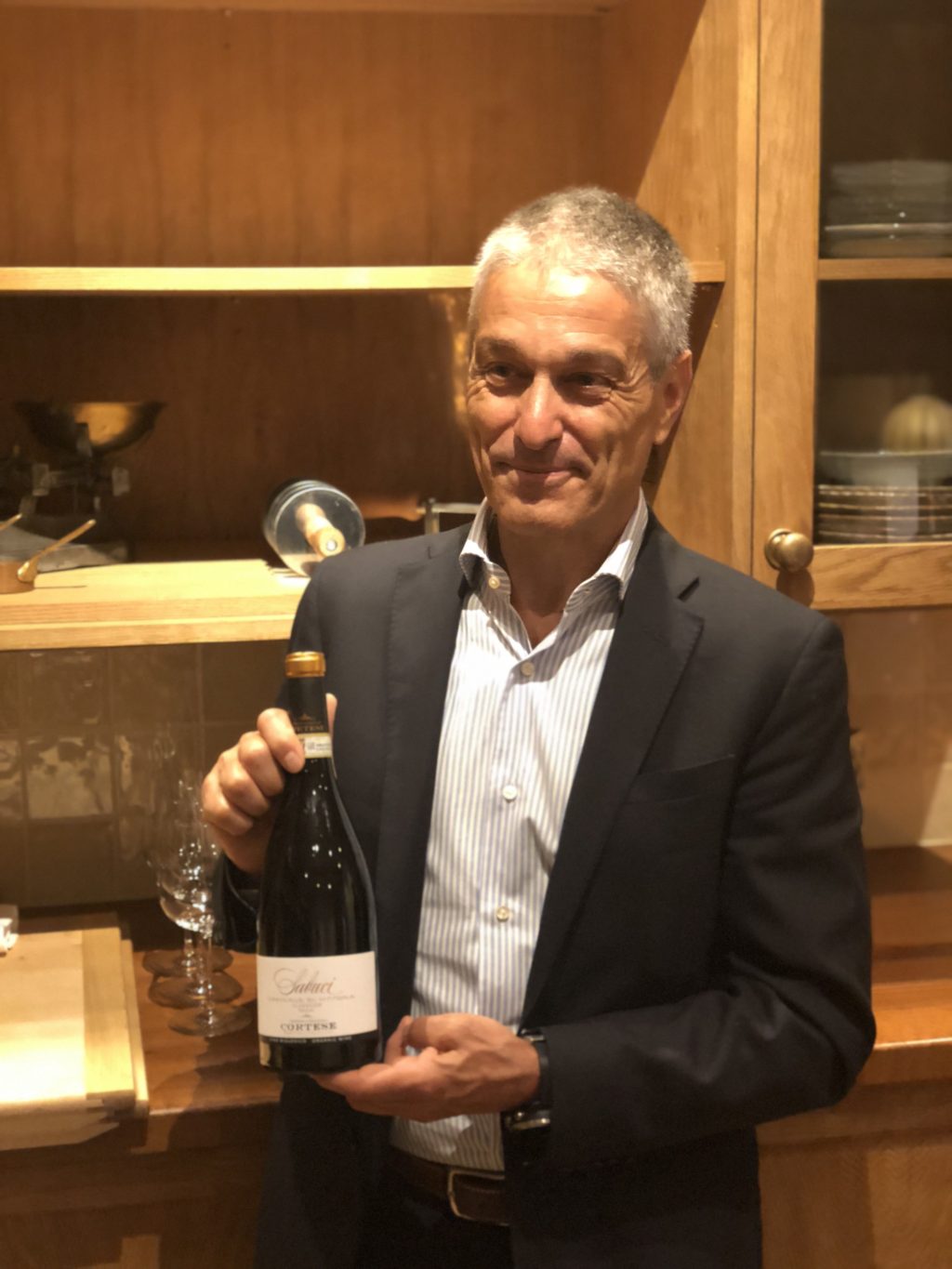 Stefano Girelli and his Santa Tresa estate have been in the vanguard, seizing the opportunities that Sicily’s climate offers for organic winemaking, focusing on its native grapes, delivering wines that exude a sense of place.

The tensions between Italy’s north and south are well known, so it’s surprising to find that Girelli actually hails from Trento. In 2001, he took over the 17th century Fuedo (estate) of Santa Tresa, having identified it as the perfect place to make natural wines with the minimum possible intervention. In short, keeping it simple.

… “with organic, the purity shines through” …

“Nothing is ever really simple, or easy, with organic winemaking”, Girelli tells me, “growing grapes organically is complicated as it’s a different world”. So why do it? “I have no doubt that pesticides limit the tipicity of the vines and the terroir. With organic, the purity shines through.”

Sicily’s warm Mediterranean climate does at least mitigate some of the challenges: “I came from the North, where our priority was to direct sunlight onto the grapes. In Sicily, we use careful canopy management to protect the bunches from the sun”, he says, “for grape growing, Sicily really is heaven, but you need to be in the vineyards, always vigilant”.

… another piece of heaven …

In recent years, Girelli has had his eyes on another piece of heaven, just 8 kilometres away, near the town of Ragusa in Sicily’s arid south. Azienda Cortese’s 14 hectares had been farmed for decades by Giovanna Cortese, until her retirement at the age of 82. Clearly feisty and determined, it was six years before she accepted Girelli’s offer to buy the estate, finally satisfied that it would be nurtured for a new generation.

“She is a proud lady”, says Girelli, “she couldn’t actually remember how many years she had been farming the land organically, but it was certainly since the turn of the Millennium. Her family didn’t want to take over, but she needed to know that it would go to someone she could trust,”.

With 50 hectares to keep him busy at Santa Tresa, why was he so keen to take on the challenge of a new estate? “The land is nearby, but very different, with an exciting biodiversity and a range of different clones in the grapes. My team is still assessing them and conducting analysis of the soils”.

Among the discoveries, a plot that had gone wild without irrigation for a decade, producing a small yield of grapes with “concentration and structure”. The initial plan was to use the vines to increase production at Santa Tresa, but the quality, and unique nature, of what he discovered inspired Girelli to establish an eponymous brand for Cortese, using ancient techniques including open top barrel fermentation and amphora winemaking to give his new wines a distinctive identity. 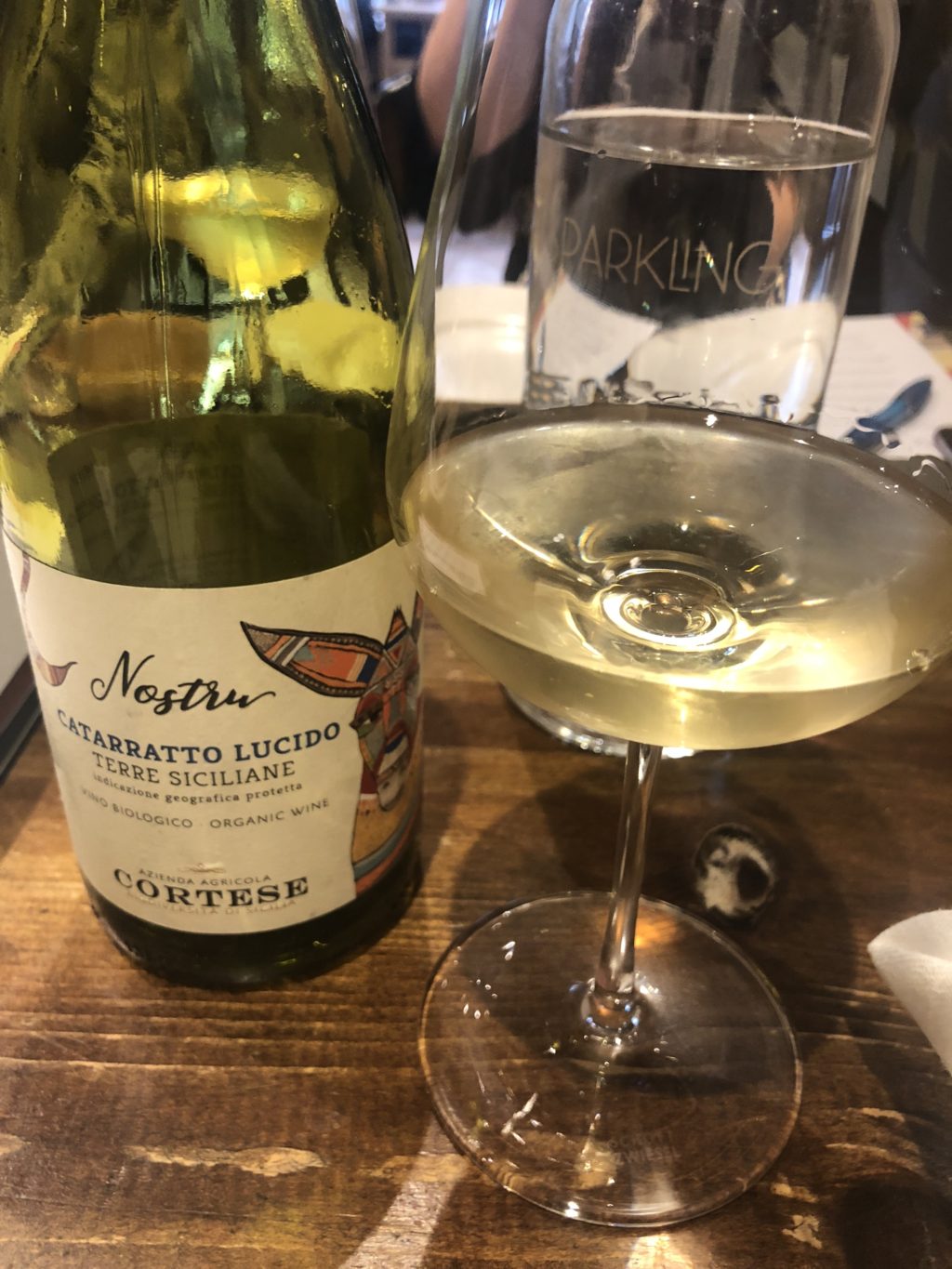 There are two ‘tiers’ of wines under the new Cortese brand: the entry level, ‘Nostru’, uses organic grapes from neighbouring producers, whilst the premium ‘Selezione’ is reserved for estate-grown grapes. I particularly loved the artwork for the Nostru wines, featuring Sicilian themes in vibrant colours, including a hallucinogenic donkey that has definite shelf appeal.

The chef and head sommelier at Luca crafted a pairing menu for each of the six new wines, and I was in august company, with Steven Spurrier and Peter McCombie MW all here to taste them for the first time.

To begin, a familiar name with a dubious past: Catarratto is Italy’s most common white grape, often used in concentrated must, or to pad out bulk wine, but there are three recognised clones – Comune, Lucido and Extra Lucido – with the latter two rated much more highly. Lucido means ‘bright’ in Italian with the name coming from the grape’s shiny skin. It’s aptly named, as that brightness is matched by the wine. Nostru Catarratto Lucido 2017 (£12) has a pretty nose, a mix of citrus blossom and kitchen garden herbs, with vibrant acidity and a bit of mineral streak, which paired well with the Vitello Tonnato and capers.

Carricante, is usually synonymous with the white wines of Mount Etna, which I happen to love. Stefano Girelli thinks it also works further south on the island, where it’s grown at an altitude of around 400 metres, and he’s right: Nostru Carricante 2017 (£12) feels precise, with lime, green apple, scintillating minerality and a long finish, perfect for the saffron risotto it came with. 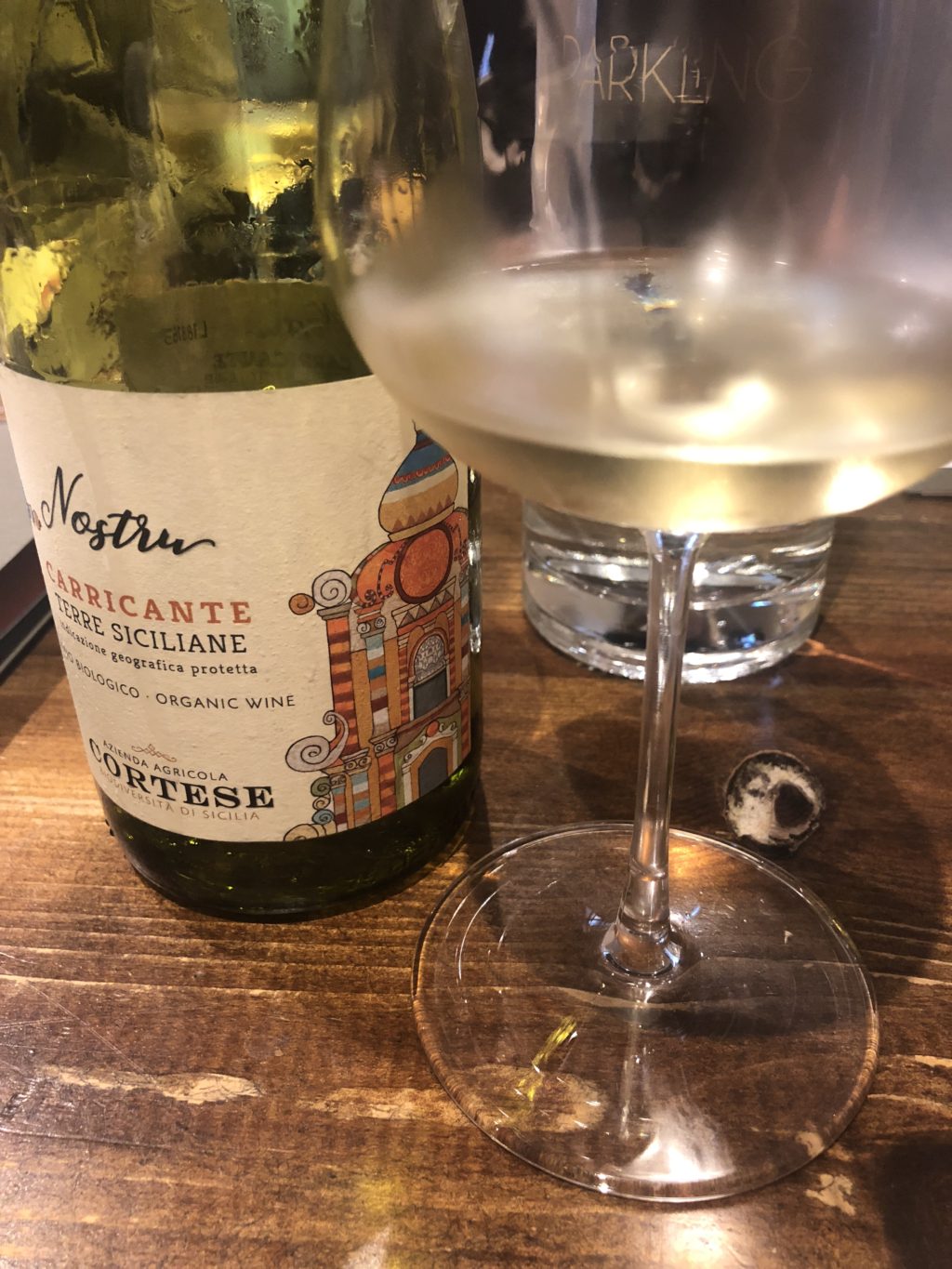 Our third white came from the premium tier: Vanedda Bianco 2016 (£16) is a blend of Catarratto and Grillo, hand harvested, chilled for 24 hours, de-stemmed and fermented on skins for a couple of days, before being transferred to large oak casks. The wine stays on its fine lees for at least seven months and is bottle aged for six months before release. This results in an idiosyncratic, textured, golden feast of tropical fruit, slightly smoky, with a mineral edge and sumptuous length, all achieved with zero residual sugar. It made light work of the fiery ‘nduja that accompanied the Orkney scallop and Jerusalem artichoke. 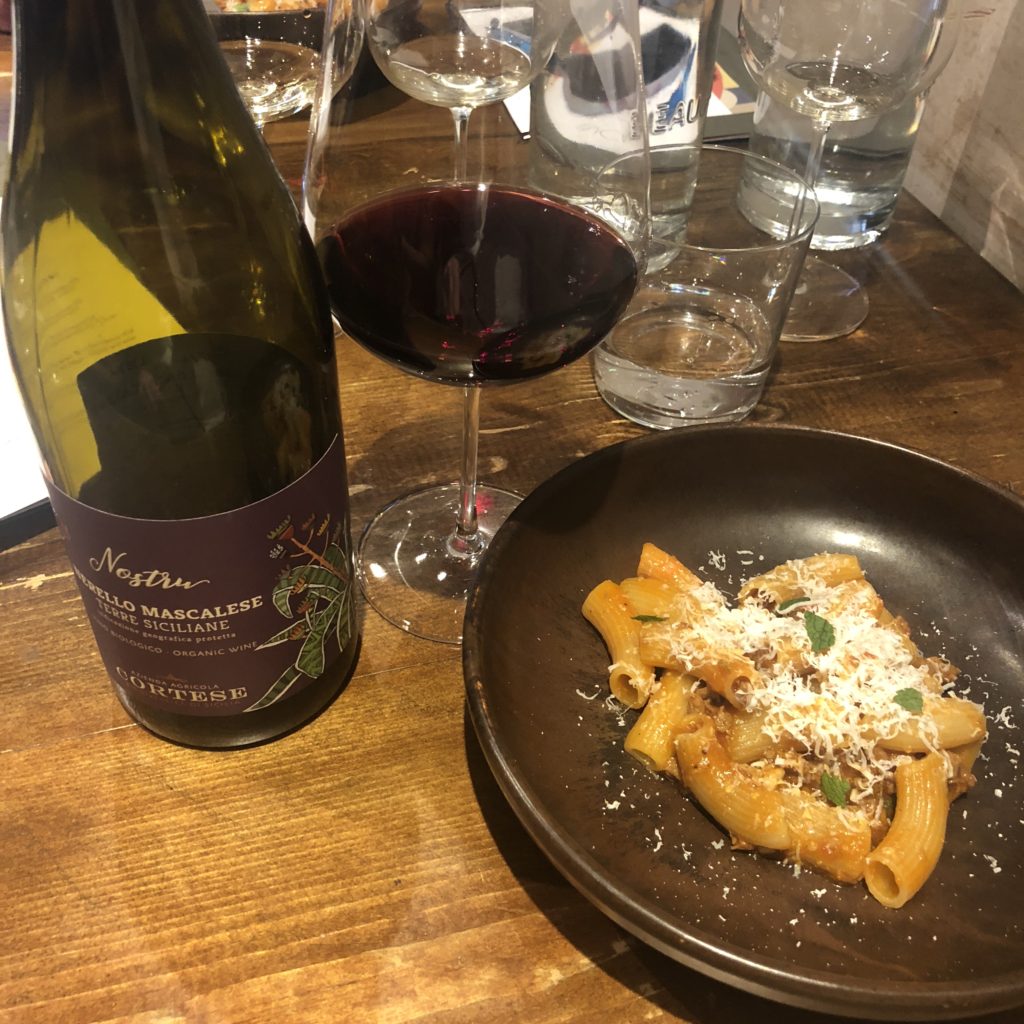 The first of the reds: another émigré from Etna, Nostru Nerello Mascalese 2017 (£12), was offered up with a delicious sausage ragu rigatone. Made with purchased organic grapes, it was a cherry festival in a glass, with crunchy red fruit, soft silky tannins, subtle spice and that unmistakeable nervy, slightly sulphurous note that suggests a lava flow might be heading your way sometime soon.

Next, from the premium tier, Senia Nero D’Avola (£20) is fermented in open top barriques, spending around 3 weeks on its skins, giving it an intense, shiny ruby red. The nose is elegantly perfumed, with violets supporting the intense cherry and foraged blackberry notes. On the palate, the wine is lighter than you might expect, and more refined than almost any other Nero D’Avola I have tasted, with the refreshing acidity cutting through the ox cheek and polenta it was served with. 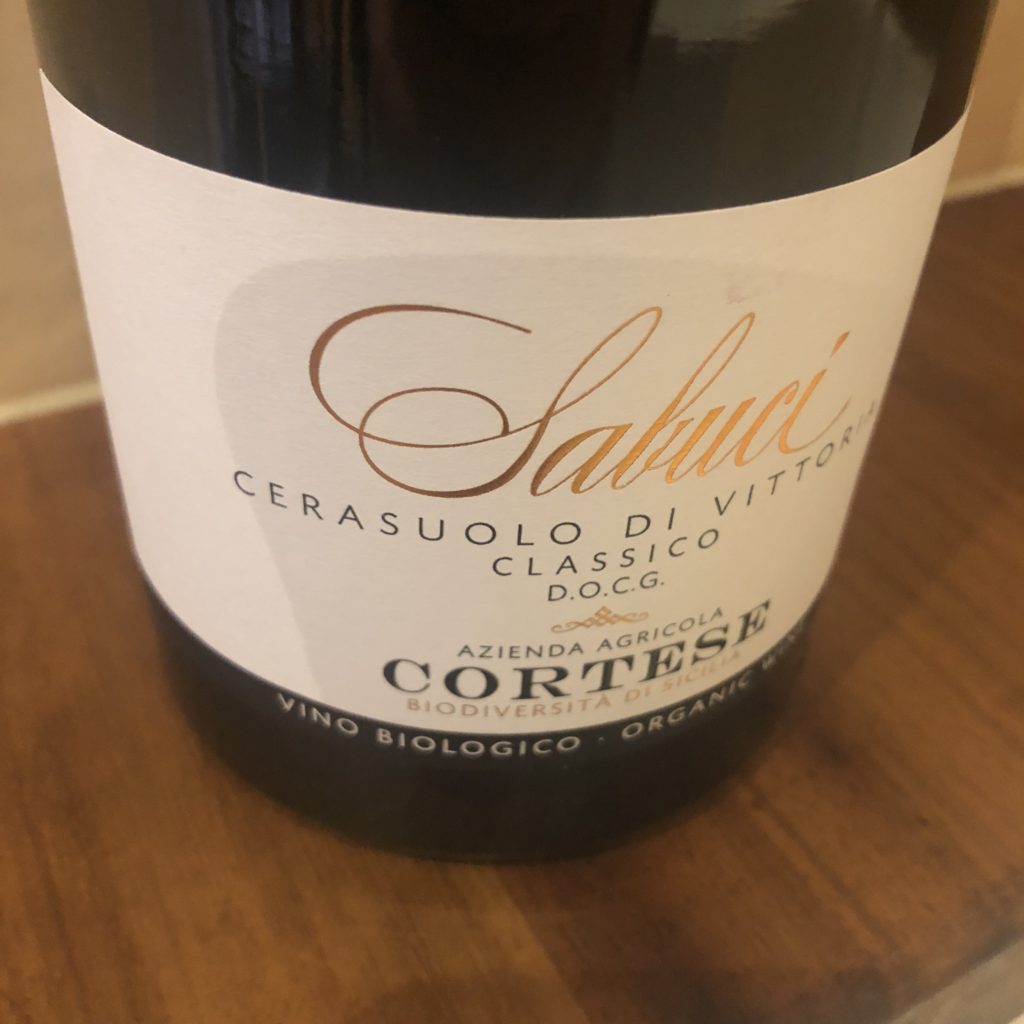 Finally, the Sabuci Cerasuolo Di Vittoria Classico DOCG 2016 (RRP £20), a blend of 60% Nero D’Avola and 40% Frappato, uses two different fermenting techniques to deliver an unusual and uplifting wine. The Nero D’Avola grapes are fermented in open top barriques, while the Frappato goes into seven hectolitre terracotta amphora, remaining on its skins for a year. Stefano Girelli believes the amphora provide “the perfect oxygen exchange”. The resulting wine, blended, then aged in oak casks for six months, uses old-fashioned winemaking to produce a thoroughly modern wine, combining the forest floor earthiness of Nero D’Avola with the aromatic lift of Frappato. Partnered with lamb sweetbreads in a rich chestnut and porcini mushroom sauce, it made for a magnificent finale and represents extraordinary value at the recommended retail price.

The Cortese range is being launched into the market by North South Wines (the importer), focused at restaurant wine lists and specialist retailers, starting with Slurp – and these are, without doubt, wines to watch out for in 2019.