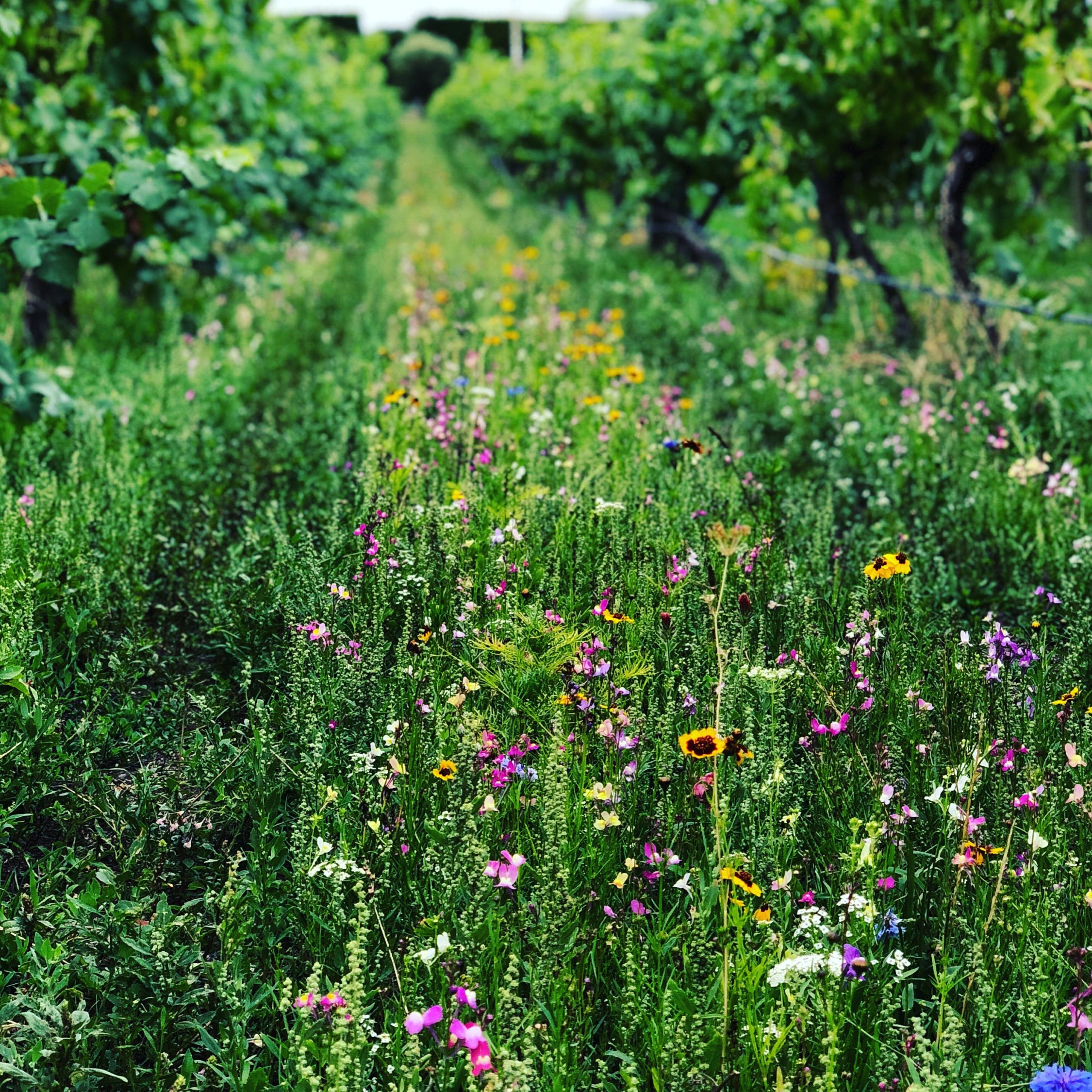 The next stop on my journey is Martinborough, in the south-easterly corner of the North Island …

Most things Kiwi are refreshingly straight forward. Wine labelling isn’t really regulated, aside from the usual health warnings, and unlike Germany – where fluency in the language isn’t enough, you really need an oenology degree to decode the label – it’s easy to navigate and understand.

Until you get to Martinborough, or Wairarapa, or, err, Wellington, that is.

I’ve always talked about a ‘Martinborough Pinot’, but that’s just the town, and its immediate surroundings. Wairarapa is the region, but the wines apparently ‘officially’ come from Wellington, which is the designated production zone, as well as being the country’s capital.

To me, Martinborough – a small, attractive, clapboarded, market town – has always been ‘New Zealand’s Burgundy’, producing an enticing range of pinot noir wines that tend towards the more savoury style pioneered by the Cote D’Or.

In this place, the wines do the talking …

Martinborough has a few pioneers of its own – and Larry McKenna is one of them. His Escarpment wines have been trailblazers for pinot in this part of the world; he’s a slightly gruff, modest Ozzie, who seems devoid of ego. There’s not much ‘showbiz’ to be seen in the ‘tasting room’ either, a wooden hut at the edge of the vines: in this place, the wines do the talking.

Accompanied by Larry’s protegee, winemaker Huw Kinch, we take a tasting that kicks off with a relatively new rosé named Nina, after Larry’s daughter. Made from Pinot, of course, it’s distinctly perfumed, with abundant strawberries and a twist of white pepper. A range of whites follow, including a delicious chardonnay that also uses Burgundy as its reference point, with peaches and nectarines, creamy texture and delicious textured mouthfeel, from careful work on the lees. And then the real stars of the show, starting with the 2015 Escarpment Pinot Noir, a blend of Larry’s sites, hand-harvested and fermented with indigenous yeasts, to create a ripe wine,  bursting with smooth red cherry and plum and just a little green pepper. The flagship is Te Rehua, from a single vineyard, close to the town. The 2016 has many years ahead of it, but already exhibits tempting savoury character, with succulent black and red fruit character and beguiling floral notes, fine-grain tannin structure and layers of complexity. 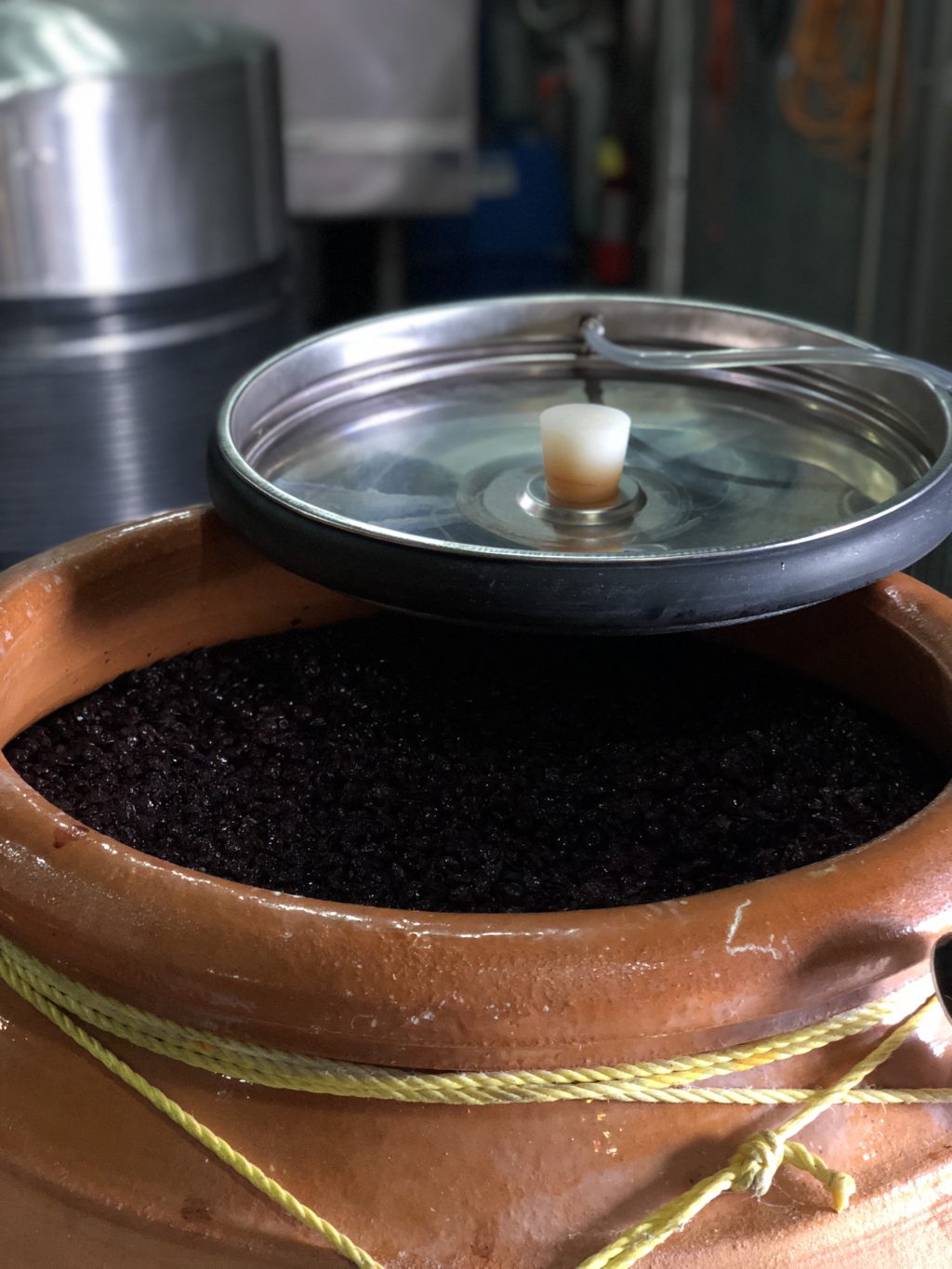 Sitting on the edge of the escarpment that inspired the name, the winery itself seems to be a hotbed for experimentation, the latest being amphora winemaking. I take a sample of a pinot being made with no additions of any kind, which tastes seductively pure. It’s like a spiritual experience.

I soon realise that almost everything here is slightly floral …

On the edge of Martinborough itself, the Schubert ‘cellar door’ is small, rustic, and packed with enthusiastic German visitors, making a pilgrimage to sample the wines of fellow countryfolk, Kai Schubert and wife Marion Deimling. Having learnt their art from the legendary Erni Loosen, they set off across the world twenty years ago in pursuit of the perfect place to grow their beloved pinot noir. They found it here.

Sadly, I don’t get to meet them (the summer holidays are in full swing), so I get to know them vicariously, through their wines. After an interesting, fresh and slightly herby Sauvignon Blanc, next up there’s a grape I hadn’t expected to find in modern day New Zealand: Müller Thurgau. This much-maligned German ‘crossing’ (of riesling and Madeleine royale) was once synonymous with the likes of Liebfraumilch and the dreaded Blue Nun; Kiwi growers have spent the last few decades trying to get rid of it. Not here, where it’s used as part of a blend, with chardonnay and pinot gris, to create ’Tribianco’, and – to my surprise – it makes a pleasing, delicate, floral, off dry wine to rival a Gewurtz. I soon realise that almost everything here is slightly floral. There are two excellent pinots: the critically-acclaimed ‘Marion’s Vineyard’ and the distinctly un-romantic-sounding ‘Block B’, my favourite, with its seductive perfumed – yes, floral – nose and ripe layers of gateau-esque black cherry, exotic spice and chocolate. Then there’s the syrah: the purple-looking 2014 is a magic wand-wave of violets, jasmine blossom and spice cupboard, with a purity of fruit, and enough savoury, gamey character following through to give it real balls. It’s full of character and I love it. 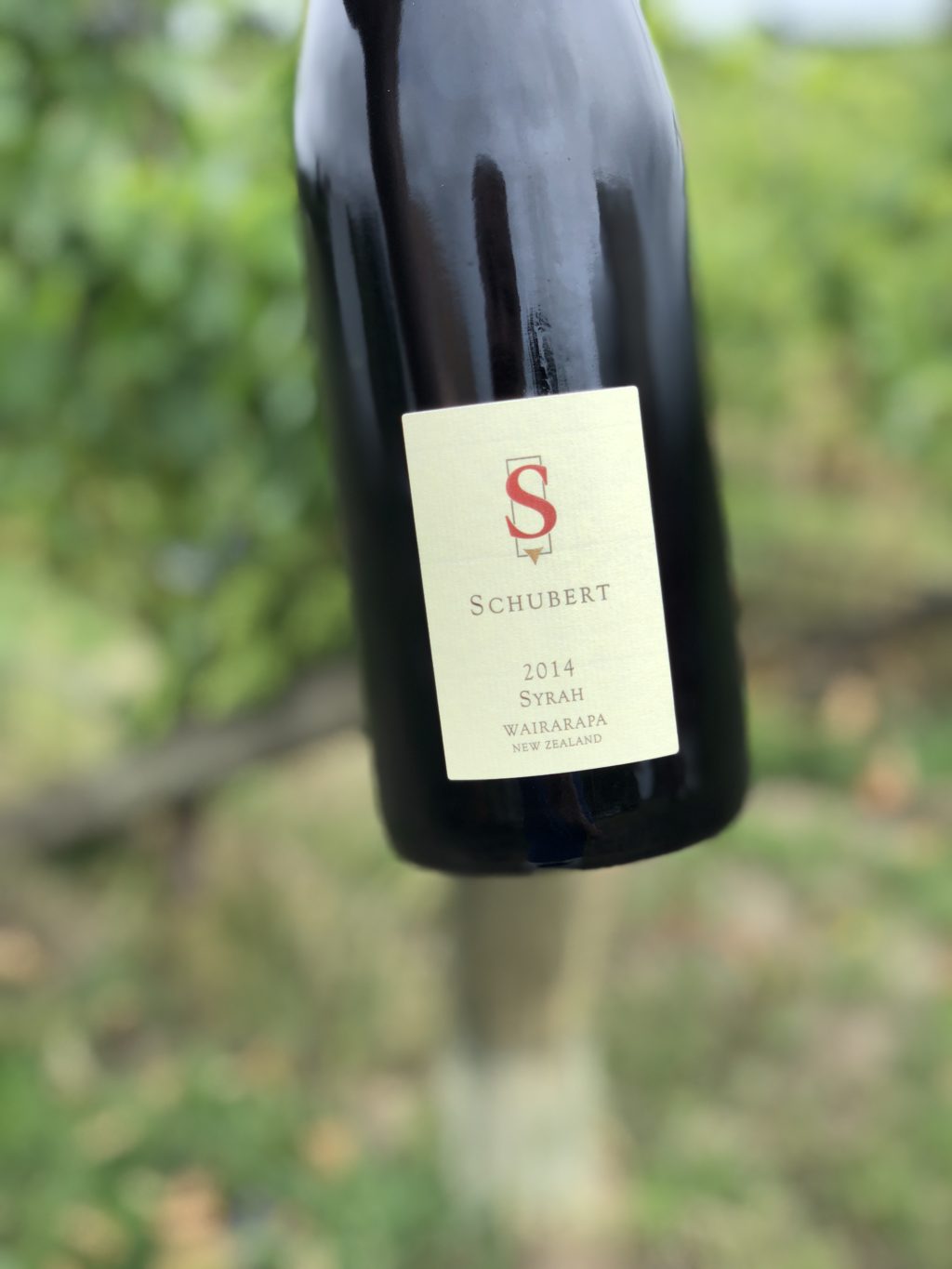 Such is the impact of New Zealand’s wines on the world stage, that it’s hard to imagine that as recently as the early 80s it was still getting started. One of the early pioneers was Clive Paton who, together with wife Phyll and sister Alison, established Ata Rangi in 1980.

One of Clive’s first plantings has become one of the country’s most celebrated. The cuttings were given to him by Malcolm Abel, a part-time winemaker, who also worked as customs officer at Auckland airport. New Zealand has strict bio-security measures, so when a backpacker returned home carrying a cutting he had allegedly taken from Burgundy’s finest estate, Domaine de la Romanée-Conti, it was confiscated. Abel appreciated its significance, and sent it straight to the state-owned viticultural research station, patiently waiting for the first cuttings to become available. He duly planted and nurtured them, and then passed on their offspring. Thus the Abel Clone became one of the country’s most important vines. No-one knows who the thieving backpacker was, but he probably deserves a medal for his nefarious role in transforming the country’s wine map.

Organically-certified, Ata Rangi’s approach is all about the soil: there are wildflowers between the vines to encourage biodiversity, wine waste goes into compost, predatory wasps are encouraged, to feast on caterpillars. 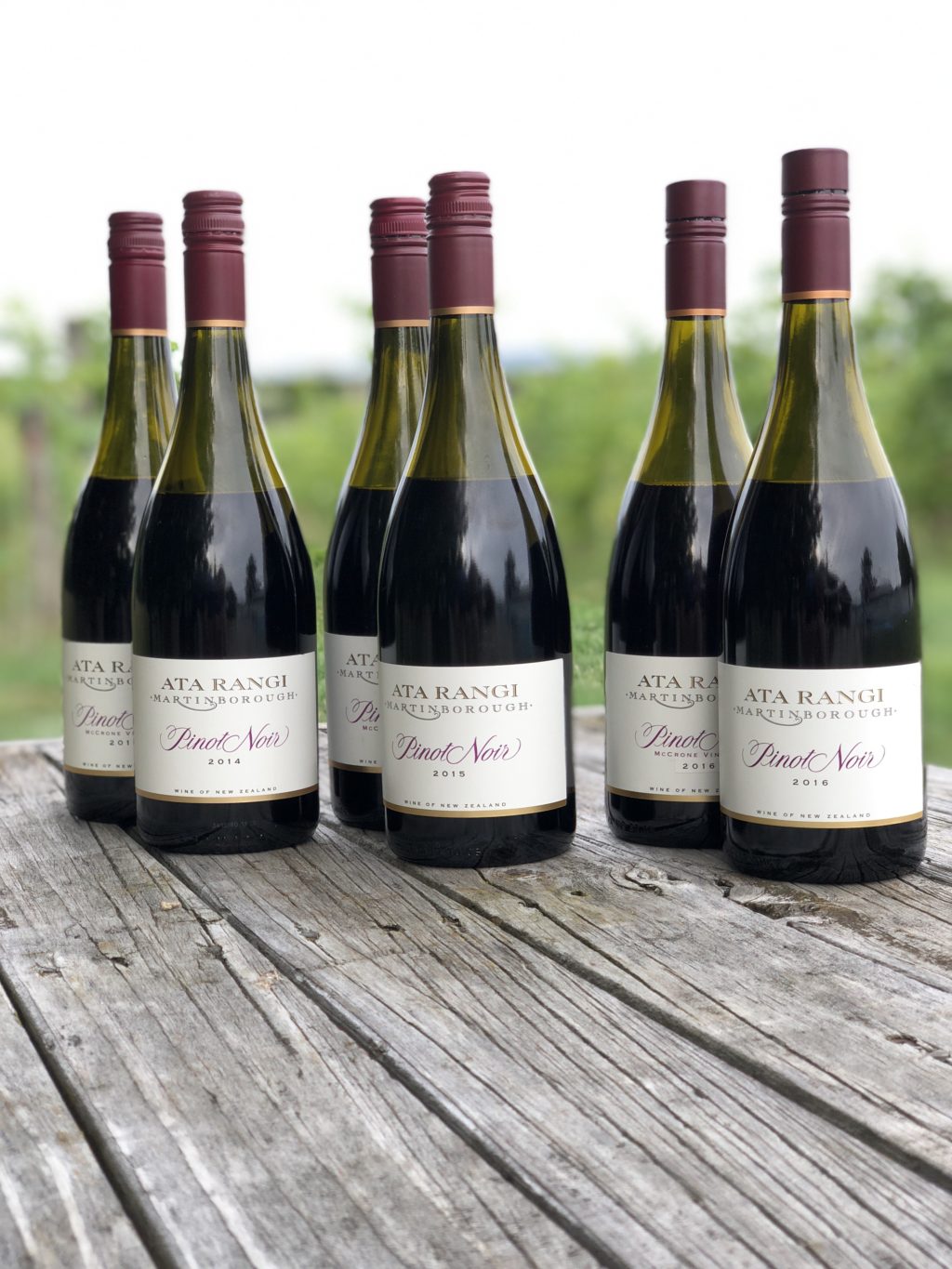 Ata Rangi’s hugely talented winemaker is Helen Masters, who’s been in charge since 2003. There are nine different wines, but our marathon tasting session takes in some vertical tasting for vintage variation, including three successive years of Pinot. There are many highlights: the delicious ‘Craighall’ chardonnay, with its citrus tension, wet flint and silkiness; the unusual ‘Rarangi’ sauvignon blanc, intense and aromatic, more greengage than grass, benefitting from being part-fermented as an ‘orange wine’ on its skins for a couple of months; the exciting ‘Lismore’ pinot gris, with red apple, Anjou pear, cherry blossom and a slither of savoury dough adding to the textured feel; the powerful ‘McCrone’ pinot noir, with violets and orange blossom, from a proportion of whole-bunch fermentation, followed by deep cherry, black plum and liquorice, interwoven with savoury spice; and the inviting ‘Celebre’, a blend of merlot, syrah, cabernet sauvignon and cabernet franc, with its lively, fresh mix of floral notes, juicy red berry fruit and delicate tannins.

I feel I’m well and truly living the Kiwi lifestyle …

As the sun sets, I’m invited to stay for dinner, in the wooden former influenza hut that’s now co-founder Alison’s funky home amidst the vines. After a beer and a stroll through the vines with Clive, we eat fresh produce from Helen’s garden – vegetables, salads, herbs and fruit – and I feel I’m well and truly living the Kiwi lifestyle.

Next morning, it’s off to Gladstone to visit Urlar, a relative newcomer certified organic from the start. That’s relatively unusual as it’s easier to get things going with the aid of fertilisers and weedkillers, then convert. Set around a man-made lake, used to provide water for the vines in a drought, this family-owned vineyard follows the biodynamic calendar, farming by the rhythms of the sun, the moon and the stars. 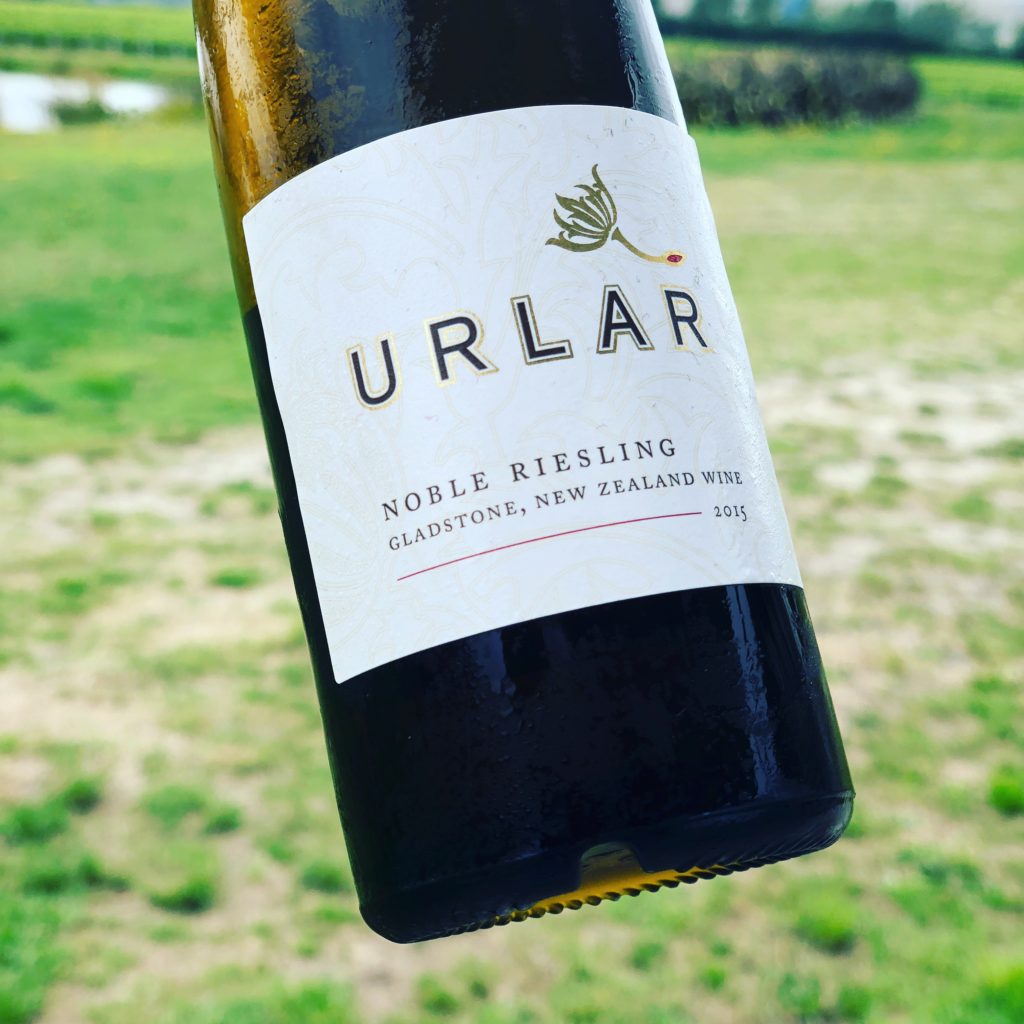 Jannine Rickards has recently arrived as winemaker, having worked in wineries all over the world, and she’s still bubbling with enthusiasm for her new role. We taste a pithy, fragrant sauvignon, contrasting the ’16 and ’17 vintages and a barrel-aged premium version, which adds a ratafia biscuity element. There’s a lighter, brighter Pinot Noir, again complemented by a top-end ‘Select Parcel’ alternative, with enticing aromatics from some whole bunch, with brooding dark fruits and a gamey savouriness. There’s also a really lovely late harvest noble riesling, offering fresh lime marmalade, bruised apple and ripe apricots. Sadly, it’s not in the UK, but I hope it one day will be.

If John McDonnell made wine, would Philip Hammond drink it? …

A few miles away, near Masterton, the Matahiwi winery is owned by the Wairarapa MP, Alastair Scott – a national political figure. I ponder, back home, how divisive that might be: if John McDonnell made wine, would Philip Hammond drink it? I doubt it. Here, it doesn’t seem to be an issue.

Winemaker Miles Dinneen is another newcomer, having recently moved from Hawke’s Bay (a few days later, I will taste his excellent ‘Crossroads’ syrah, made for the Peter Yealands group, which is aromatic, rich and delicious).

There’s a similar mix of wines to Urlar up the road: a fresh, zingy Sauvignon Blanc; a fuller but relatively refined pinot gris; a subtle, slightly saline, lightly oak-fermented Hawke’s Bay chardonnay. Then there’s the ‘Holly’, premium range including: a bigger, richer 100% barrique-fermented ’16 chardonnay, which is big, creamy and complex, probably not hugely fashionable but all the better for it; and the ’16 Wairarapa pinot noir, which came from a warm summer and clearly reflects the work that went into leaf plucking and green harvesting, with its intense black fruit, cedar, toasty oak and smooth tannins. 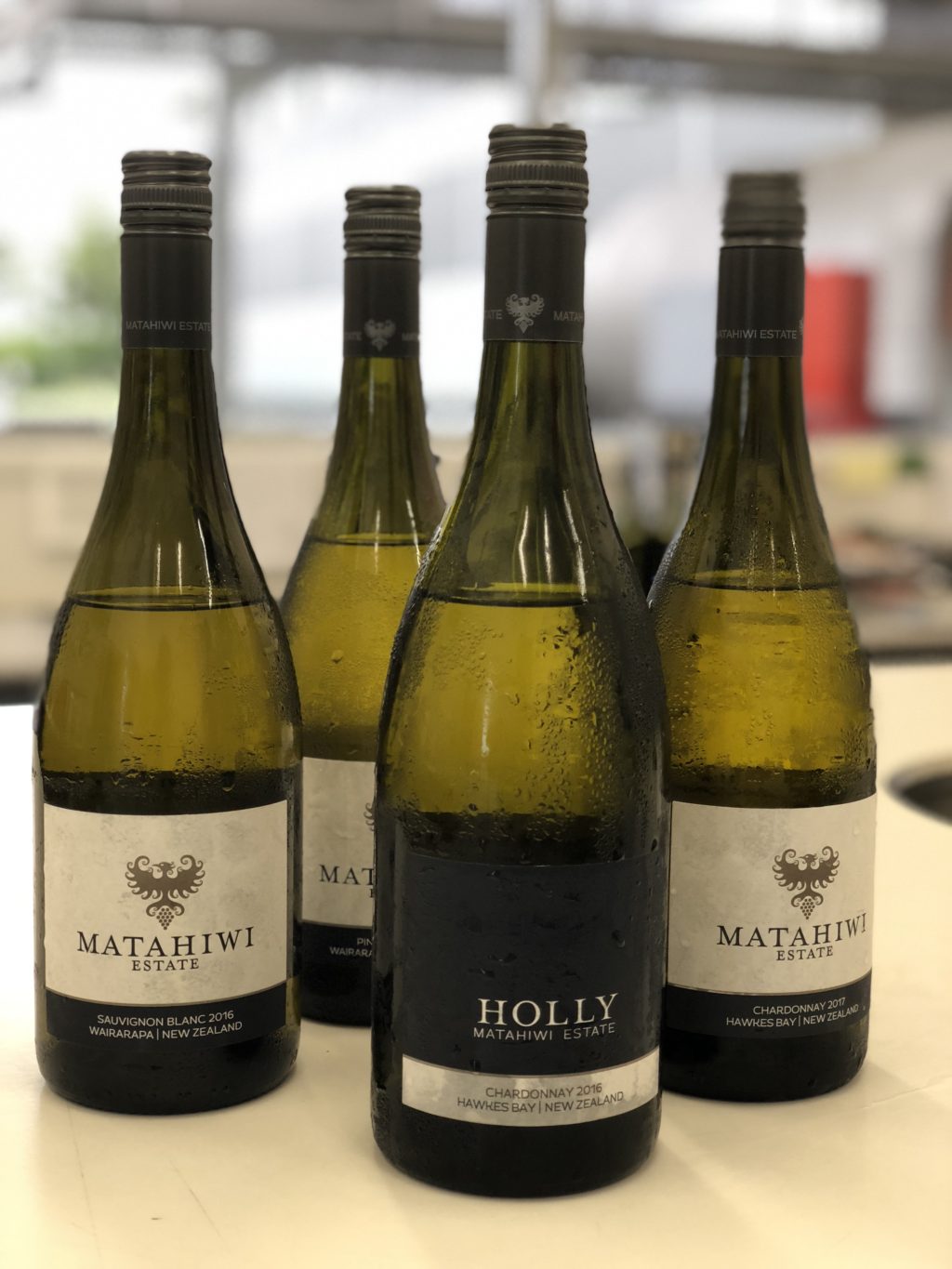 The wine labels say I’m in Wellington, but that’s still an hour away. I have a ferry to catch.

UK stockists: see my suggestions after the last article in the series