A peak at PICA: the technology driving winemaking

We hear so much about the way technology is reshaping winemaking, but there’s something really striking about seeing first-hand the incredible level of detail on a virtual picture of the vineyards of the Trentino region: every contour represented, each plot colour-coded, every micro-climate monitored, each clickable link spewing reams of data. This is PICA, the latest tool from Cavit, one of Italy’s most forward-thinking co-operatives.

‘Piattaforma Integrata Cartografica Agriviticola’ is a software programme designed to improve quality through a process that’s reassuringly empirical. Having taken a decade to develop, more than 60 per cent of Trentino’s territory, nestled in the Dolomites north of Verona, has now been painstakingly charted, each vineyard classified for its soil, aspect and productivity, all of it supported by a weatherman’s-wet-dream of meteorological data. 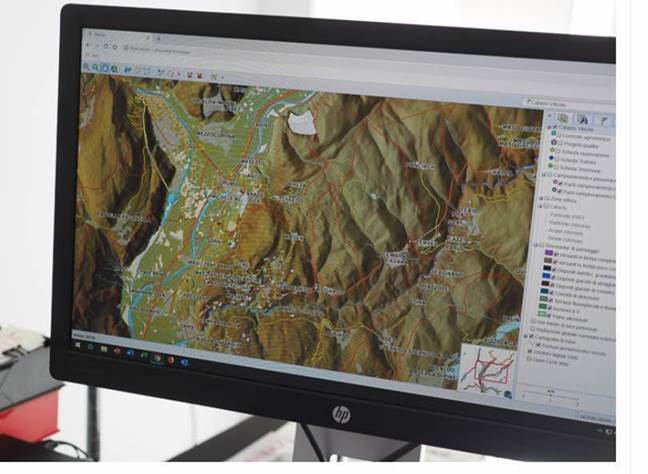 Dare I say it, the Italians aren’t necessarily renowned for working together in harmony, but Cavit suggests the contrary. Described as ‘a co-operative of co-operatives’, it was born of a post-war desire for collaboration to raise standards and build new export markets. Boasting 5,400 hectares of vineyards, 4,500 individual grower members, 10 wineries, and a team of 14 agronomists, data has never been in short supply, but the real success has been in working out what to do with it.

‘the Papa of Pica’

Led by ‘the Papa of Pica’, Andrea Faustini (pictured below), working with colleagues at one of Italy’s most important centres for viticultural research, San Michele all’Adige, the resulting programme delivers a computerised catalogue of detail on each vineyard site, but also a simple app version that growers can access on site, to input data and photographs, or to follow recommendations from the Cavit team. It also delivers text alerts, adding urgency for the likes of frost or hail warnings.

“It is an important tool for making crucial decisions quickly, with precision”, says Faustini, “PICA represents scientific know-how for everything that affects the plant. It is very unusual to have so much technology available to small growers and this is one of the great benefits of working together”. 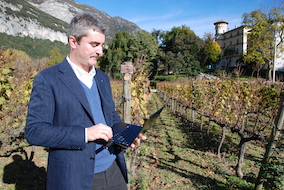 Those growers, many of them representing generations of tradition, might initially have been somewhat sceptical of the technological revolution sweeping through the hills of Trentino, but the benefits are now being felt. “The important thing was to gain their trust”, Faustini says, “and now we have almost 100 per cent uptake”. Thanks to their embrace, the database now averages more than 5,000 maturation checks for each growing season.

Running east to west in the valleys around the regional capital Trento, 80 per cent of Trentino’s vines are in the hills. Relatively small plots, mostly on pergola systems, are sewn into an appealing patchwork, producing a vertiginous vision of fifty shades of gold, for my visit last autumn.

Responsible for just two per cent of Italian wine production, the region has suffered in reputational terms for what was considered to be an uninspiring focus on international varieties. That has changed in recent years, chiefly through the stellar success of Trento DOC (known as ‘Trentodoc’), its traditional method sparkling wines, which now account for around one in five bottles produced by Cavit. Trentodoc has been a big hit in the USA, with Cavit established as Italy’s biggest exporter of wine to North America, by both volume and value. Neighbour and rival, Ferrari, also has a powerful presence in the US market. 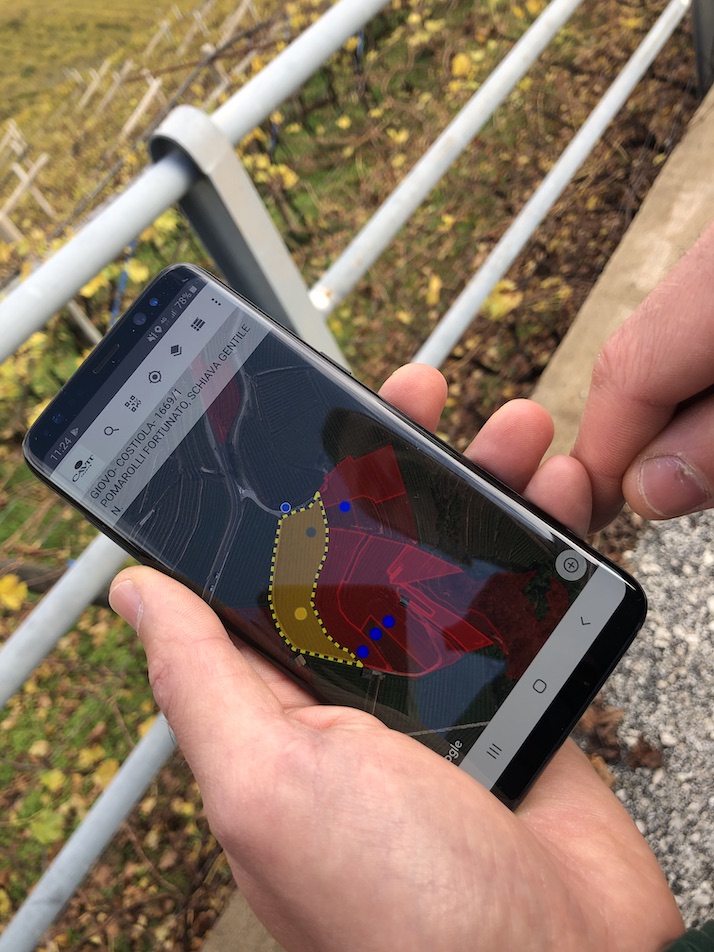 Aside from supporting everyday decision making, with regular guidance on treatments and optimum harvest dates, PICA’s data is also driving real change in the region, with the most significant impact being a move upwards. “Pica is tracking climate change and helping us adapt to it”, Faustini tells me, “average temperatures have increased, with the year 2000 the turning point, so the data has informed our response: to move the vines higher up the hillsides”.

With its wealth of information, the system is directing long-term strategic decisions on planting. “It has been very useful for Sauvignon Blanc (an increasingly important variety in the region), in terms of selecting the right soils in the best sites”,  Faustino says.

Perhaps ironically, this state-of-the-art technology is also lending a helping hand to some of Trentino’s veteran indigenous varieties too, providing valuable data on where best to plant the previously neglected and disease-prone Marzemino and Teroldego. The bright lights of the future giving new life to the grapes of the past.

Rulendis, Pinot Grigio, Cavit 2017 (£17, stocked by Bury-based online retailer  Kwoff), comes from low-yielding vines, close to the shores of Lake Garda. Really complex for Pinot Grigio, with plump, pithy citrus and ripe stone fruit, rounded off with a mouth-puckering minerality, this was one of my top wines of 2019. (Peter: Link to that piece?)

Bottega Vinai, Marzemino Trentino, Cavit 2018 (not currently imported), one of Trentino’s indigenous varieties enjoying a new lease of life, thanks in part to the data from PICA. With an enchanting floral nose, there’s bright, crunchy red fruit and a delicious herbal note, reminiscent of Italian bitters. Perfect for a daring Italian wine list.

This piece first appeared in The Buyer.