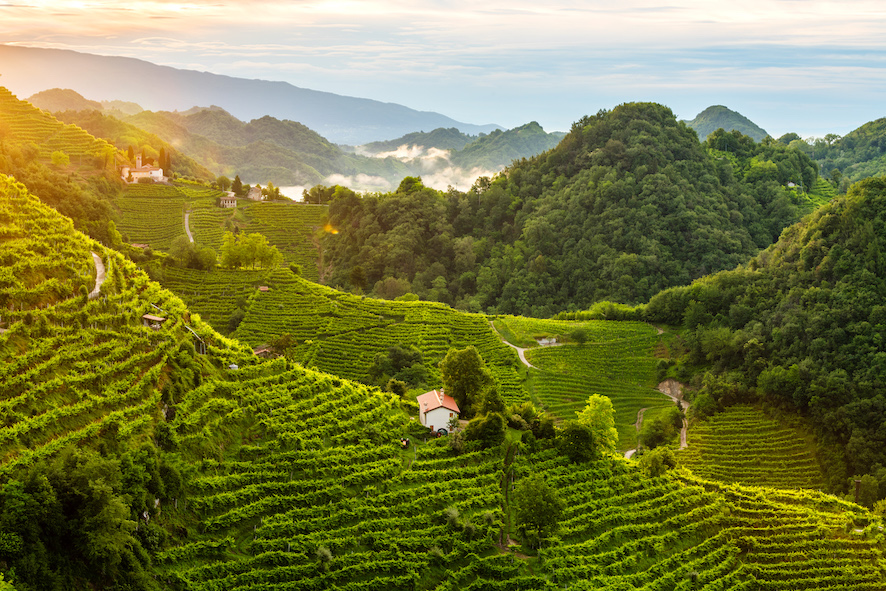 Conegliano Valdobbiadene Prosecco Superiore DOCG: is it worth it?

One of the many wonders of wine is its extraordinary capacity to reconnect you with a moment in time, or a special place.

Take Prosecco, which always reminds me of my first glimpse of Venice and the discovery that a reviving glass of faintly floral fizz could be mine for less than 50p. What’s more, it came with something to eat – ‘cicchetti’, the small plates served in traditional ‘bàcari’ bars – completing this particular epiphany.

With its current ubiquity, the fashion for lurid neon signs spelling out ‘Prosecco time’, and the occasional punch up in the rush for a budget bottle, it’s hard to believe that just 25 years ago, this essentially Venetian sparkler was virtually unknown outside Italy.

Now world famous, the name Prosecco trips off the tongue, which is more than can be said for its upmarket relation, Conegliano Valdobbiadene Prosecco Superiore DOCG (Denominazione di Origine Controllata e Garantita).

Prosecco may now enjoy a global brand awareness rivalled only by Champagne, but its pecking order is less widely understood – and well worth exploring – because the addition of a single letter makes a real difference when it comes to DOC v DOCG. 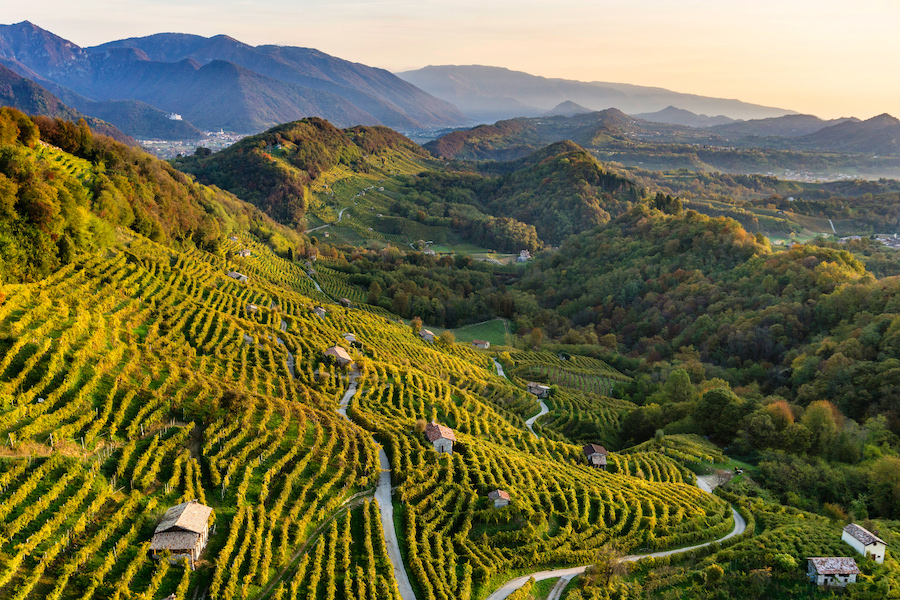 In the foothills of the Dolomites, an hour or so north of the lagoon, the towns of Conegliano and Valdobbiadene rise both literally – and metaphorically – above the plains of the Veneto region, where more basic DOC Prosecco is produced.

A UNESCO World Heritage Site, recognised for its ‘cultural landscape’, or the unique interaction between man and the environment, the DOCG undulates across a series of ‘hog’s back’ hills embroidered with a tapestry of vines, all of them tended by hand.

This is where it all began, yet these days the name Prosecco could be seen as a victim of its own success, almost always much less prominent on the label than Conegliano Valdobbiadene, as the DOCG seeks to differentiate itself from its cheaper neighbour, the DOC.

Though both use the same Glera grape and, usually, the identical Charmat method (the Italians would say Martinotti), where the secondary fermentation happens in a pressurised tank, the similarities end there, as yields are lower and there’s a much more specific focus on terroir. Overall production is less than a fifth of that of the DOC.

happy to be a Prosecco

“Wine professionals sometimes dismiss DOCG as ‘just another Prosecco’. They are very wrong,” says Master Sommelier Matteo Montone, Wine Director at the London Edition. “It is undoubtedly superior, but it would be a mistake to think Conegliano Valdobbiadene wants to be a Champagne, it is happy to be a Prosecco.”

“The superior fruit quality in the DOCG is evident, the wines express their terroir and the best examples we judged this year were incredibly precise,” says Montone, who judged the Prosecco category at the International Wine and Spirits Competition this year.

Conegliano Valdobbiadene DOCG Prosecco Superiore’s prolixity isn’t confined to the name itself. Deciphering the verbiage and nuances of a typical label can also require knowledge of the superior sub-zones, with the name ‘Rive’ denoting the steepest sites and ‘Cartizze’ – a form of grand cru – reserved for just over 100 hectares of Valdobbiadene’s most prestigious plots: San Pietro di Barbozza, Santo Stefano and Sacco. There’s also ‘Sui Lieviti’, more commonly known as ‘Col Fondo’, a traditional cloudy style of Prosecco on its lees that’s enjoying a resurgence. 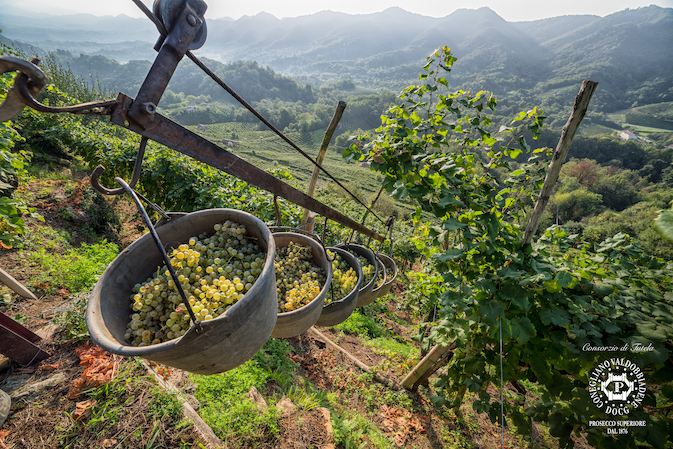 The wines are classified according to their sweetness, though the terminology doesn’t do much to help the consumer. Extra Dry is in fact fairly sweet, with up to 17 grammes per litre of residual sugar (RS), while Dry can go as high as 32 grammes. Traditionally, slightly sweeter styles were favoured but Brut, at up to 12 grammes of RS, has become much more popular in recent years and an Extra Brut classification was added last year, with 6 grammes or less, a nod to the current fashion for zero dosage sparkling wines.

Compared with Champagne’s traditional method, the tank process used for Prosecco results in  lower pressure, so there are fewer bubbles, in bigger beads. DOCG Prosecco is usually ‘spumante’, meaning there’s a minimum of 3 bars of pressure in the bottle, though it’s usually closer to 5. Semi-sparkling ‘frizzante’ and ‘tranquillo’ still wines are also permitted but cannot be labelled ‘Superiore’.

“They are such delicate wines, so the differences are also quite subtle,” says Sarah Abbott MW, a leading expert on Prosecco’s top flight. “They have an essential breezy lightness of spirit, they are not setting out to be as moody and serious as Champagne, but frankly there is more than one way for a sparkling wine to be authentic and complex.”

Traditionally, most DOCG Prosecco was consumed in the Italian domestic market, where it was better understood, but that’s starting to change. “43.7 percent of production from the DOCG is now exported,” says Abbot, “so premium Prosecco is no longer niche.”

a model Prosecco from the Delevingnes

A sign of the push to ‘premiumise’ Prosecco comes from Foss Marai, a family producer in the hills of Valdobbiadene, which has teamed up with celebrity socialites, the Delevingne sisters, Chloe, Poppy and Cara (all great fans of Prosecco apparently) to launch ‘Della Vite‘.

The new brand, stunningly packaged, has been launched with both DOC and DOCG versions, presumably to encourage consumers to climb the quality ladder and taste the difference. Curiously, the sisters haven’t followed the fashion for drier styles: both cuvées are Extra Brut, with a dosage of 14 grammes per litre, so still relatively restrained.

Della Vite also has its own, specially-selected strain of yeast. Over the last three decades, Foss Marai has built its own ‘yeast bank’, with more than 30 isolated strains, indigenous to Valdobbiadene, to support the link with its terroir. Its sustainability credentials include the use of solar power and a heat exchange system in the winery, the corks come from ‘carbon-sink’ forests, so have a beneficial effect, and both products are suitable for vegans, with a cross-flow system, rather than animal products, used for filtration.

I really enjoyed the DOCG version, with the quality of the superior fruit shining bright. Della Vite Valdobbiadene Prosecco Superiore DOCG NV (£25.99 at Selfridges, Harvey Nichols or Jeroboams) has the cool,  aromatic mountain freshness that’s a hallmark of the finest Prosecco. On the palate, it’s light, perfumed and uplifting, with plump yellow apple and a subtle mineral note.

If your budget doesn’t match the Delevingnes’, then there are cheaper alternatives that still deliver a discernible step up in quality. Lidl Prosecco Spumante Conegliano (£7.49 at Lidl stores) is excellent for the price, with its crisp green apple fruit and invigorating freshness.

A bit pricer, try Merotto, Cuvée del Fontadore Rive di Col San Martino Brut, Conegliano-Valdobbiadene Superiore Rive, 2019 (£20 at Drinks and Co) from the “Rive” steep slopes, which performed really well at this year’s IWSC awards (I know, as I judged this particular category), scooping 93 points for its “floral aromas of acacia, apple blossom and a touch of honey,” and “beautiful balance.”

Conegliano Valdobbiadene Prosecco Superiore DOCG is a proper mouthful, but that last letter really does make a difference, offering a teasing taste of terroir that’s a million miles from much of the cheap, perfunctory Prosecco found in our supermarket aisles.

Bring on the cicchetti!

A different version of this piece first appeared at Club Oenologique.