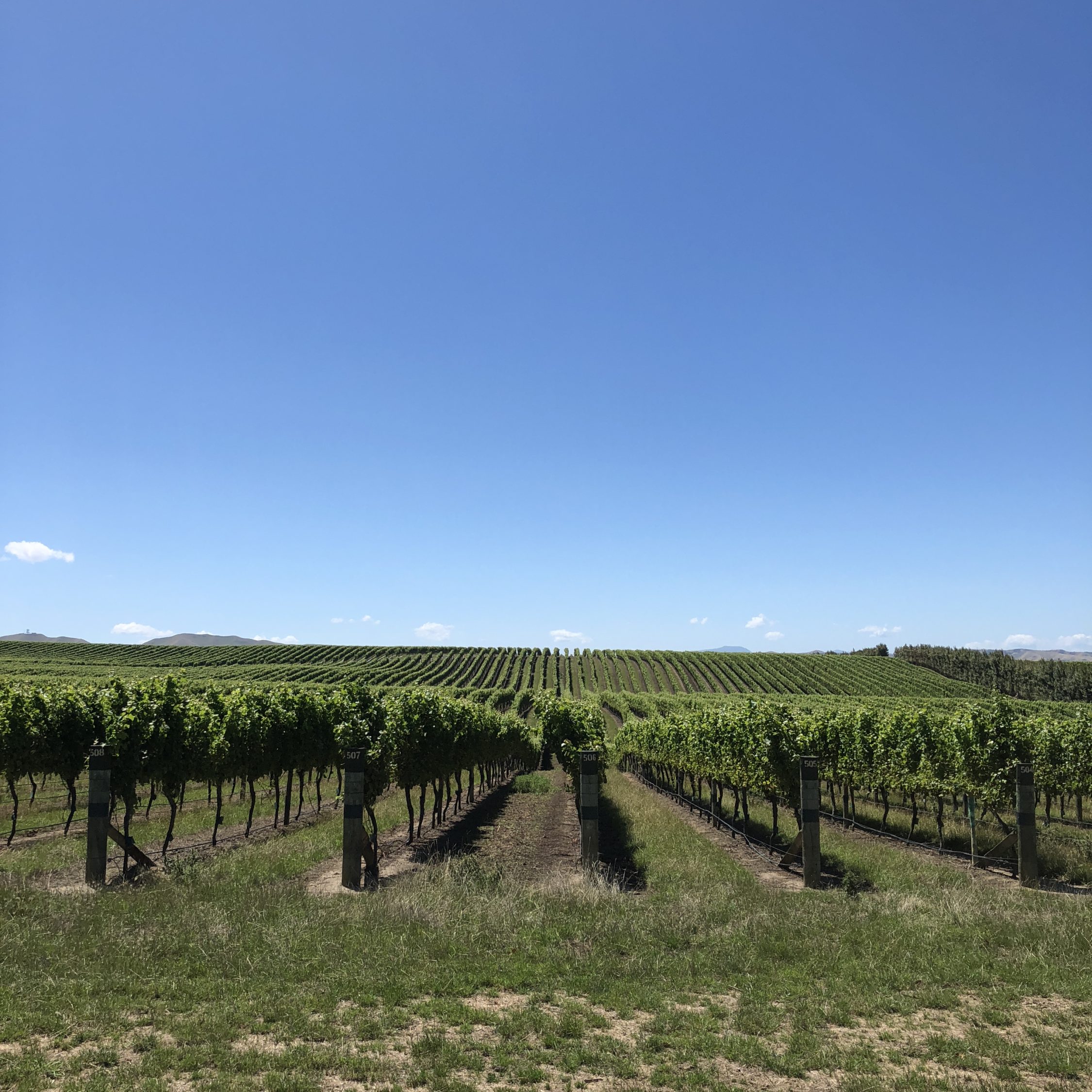 My next stop is the world-famous Marlborough, across the Cook Straits …

Staring across the Marlborough plain, its lines of vines marching toward the horizon, it’s difficult to grasp how much has changed here, in such a relatively short time.

As recently as the late 1970s, this stretch of land, in the north-east corner of the South Island, was home to barley, rather than vines. Blenheim, its regional hub, was just a small cattle town. The only thing the region was known for was its sunshine.

The first cuttings were planted in 1973 and were a disaster …

All that changed when ‘Montana’, a winery based in Auckland, decided it needed to expand somewhere where land was cheaper. The first cuttings were planted in 1973 and were a disaster. It was another five years before sauvignon blanc was chosen as the grape best suited to the region.

You may remember that ‘Montana’ was, for a while, a ubiquitous brand in the UK, before morphing into ‘Brancott Estate’, named after the site on which sauvignon was first planted.

Today, Marlborough accounts for 77% of New Zealand’s wine production, 85% of that being its distinctive sauvignon blanc, which itself accounts for an astonishing 9 out of every 10 bottles of NZ wine we import to the UK.

If Montana was in the vanguard, Cloudy Bay emerged as the conquering hero. Now owned by the luxury Louis Vuitton Möet Hennessy group, it’s the country’s most celebrated sauvignon, with a loyal and devoted following.

Valiantly stabbing at the pedals of a Land Rover whilst wearing high heels, Communications Manager Kat Wiggins is my host. A Brit, she initially suffered the same navigational nightmare with which I’m now struggling: trying to find my bearings in the Southern Hemisphere. Everything is upside down, but she has a simple tip for Marlborough: green hills equal North, brown hills mean South.

Thanks to low yield levels, diligent pruning and careful canopy management, Cloudy Bay Sauvignon Blanc earned its status by finely balancing the tropical flavours that consumers expect from the grape, with citrus and crisp acidity, avoiding the grassy, sweaty notes that can sometimes befall rivals. The world pays a premium for this wine and it’s easy to see why.

Chardonnay and Pinot Noir are blended into a much improved ‘Pelorus’ Sparkling Brut that thankfully has nothing to do with sauvignon, which never works in a fizz; a wonderful, chardonnay with subtle notes of empty matchbox, balanced with lemon and a little fresh hay, real complexity and a long, smooth finish; and a Marlborough pinot noir, a torchbearer for the variety in this region, with its crowd-pleasing mix of rose petal, plum crumble and silky tannins. 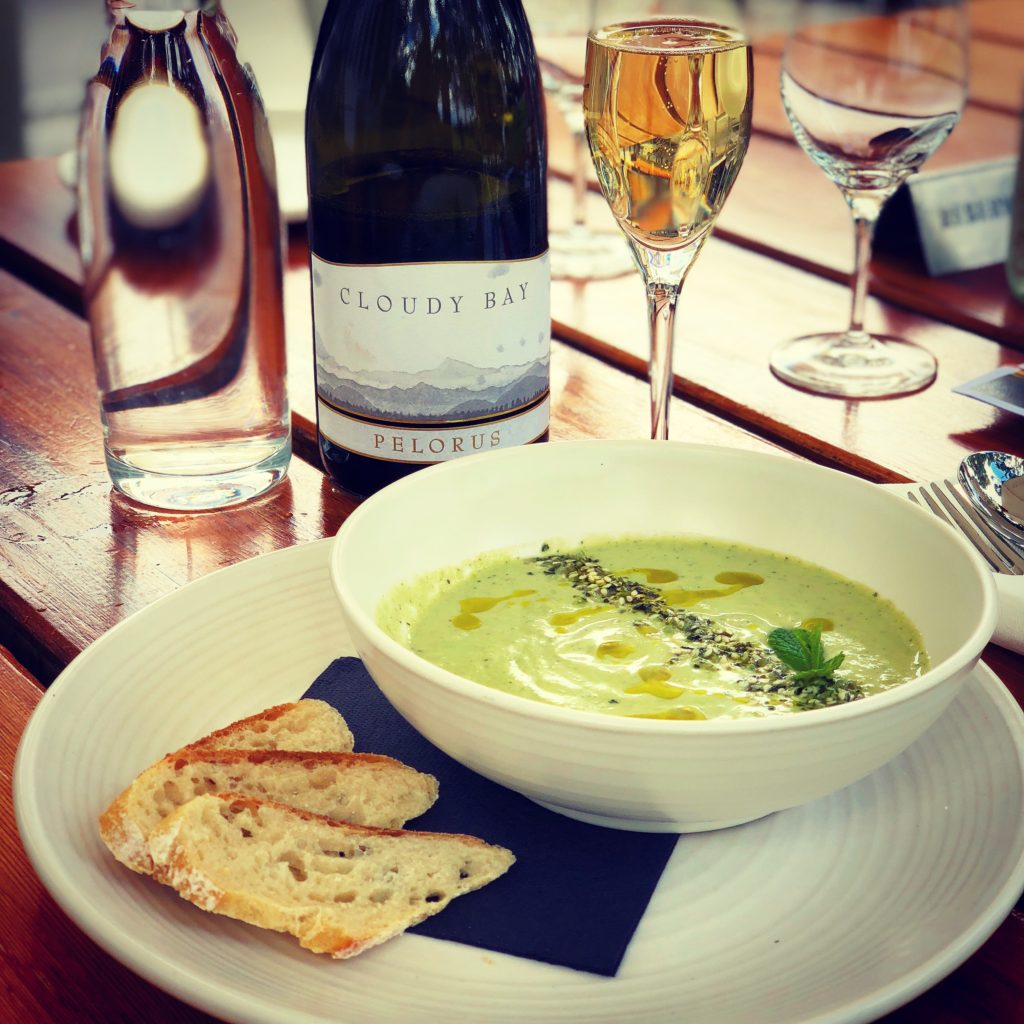 Cloudy Bay has a Japanese-inspired open-air raw bar where the classy vibe feels perfectly in tune with the wine. I’m still dreaming about my edamame and avocado gazpacho: a healthy bowl of summer bliss. If you’re visiting Marlborough, this place is an absolute must.

The Cloudy Bay range is tightly focused, but there’s experimentation to be found elsewhere.

The bottom line is a key part of sustainability …

A few miles away, at Nautilus, I meet sales boss Katy Prescott and winemaker Clive Jones, who show me around the vineyards, first planted in 1985, where sauvignon has recently been joined by grüner veltliner and albariño.

Nautilus owns about 50% of its vines, with contract growers providing the other half of its grapes. Clive talks passionately about sustainability in refreshing, no-nonsense terms: “the bottom line is a key part of sustainability: you’ve got to have a crop. Just because you’re not certified organic, doesn’t mean you’re going to nuke the soil. People like to think in boxes, like organic, biodynamic, or natural, but it’s much more complex than that and there are different solutions for different plots”, he tells me.

As you’d expect, sauvignon blanc is the main wine, offering some elegance and restraint (for Marlborough), with understated lychee, lime and a herby twist; there’s also a delicious pinot gris – a grape that seems to be much more easily understood and appreciated in New Zealand’s domestic market – from the oldest such vines in Marlborough; there’s that new-ish albariño, with mouth-watering acidity, combined with lemon blossom and mandarin; the tangy grüner veltliner, which has firm pear and honeydew melon, with a grind of white pepper; and there’s a really attractive ‘Southern Valleys’ Pinot Noir 2014, which has an enchanting floral nose of rose petals and violets, helped along by a proportion of whole bench fermentation, complemented by ripe, foraged blackberries and dark plum. 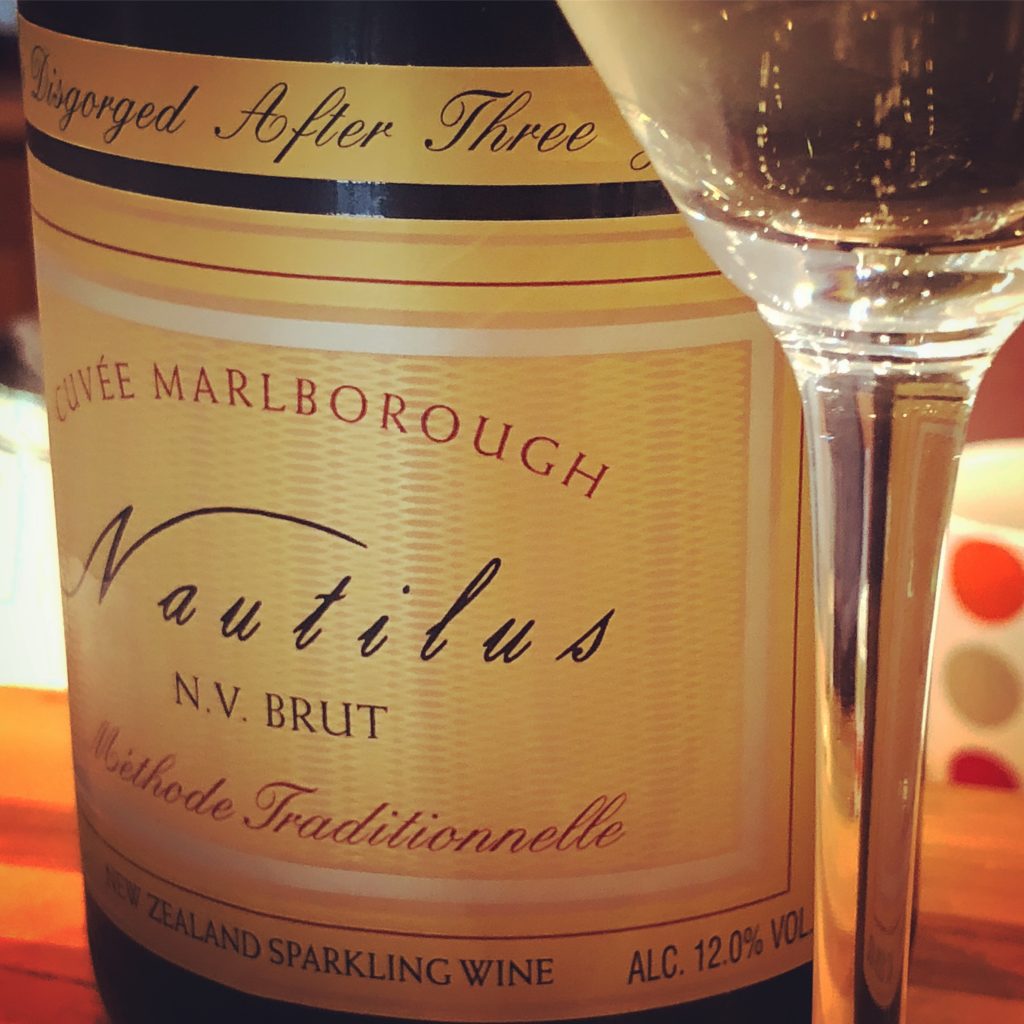 Best of all, there’s the Cuvée Marlborough Sparkling Brut – 70% chardonnay, 30% pinot noir – which has 3 years on its lees and a further year of bottling ageing, resulting in a glorious feast of nutty, toasty brioche, Manuka honey and crisp citrus acidity. 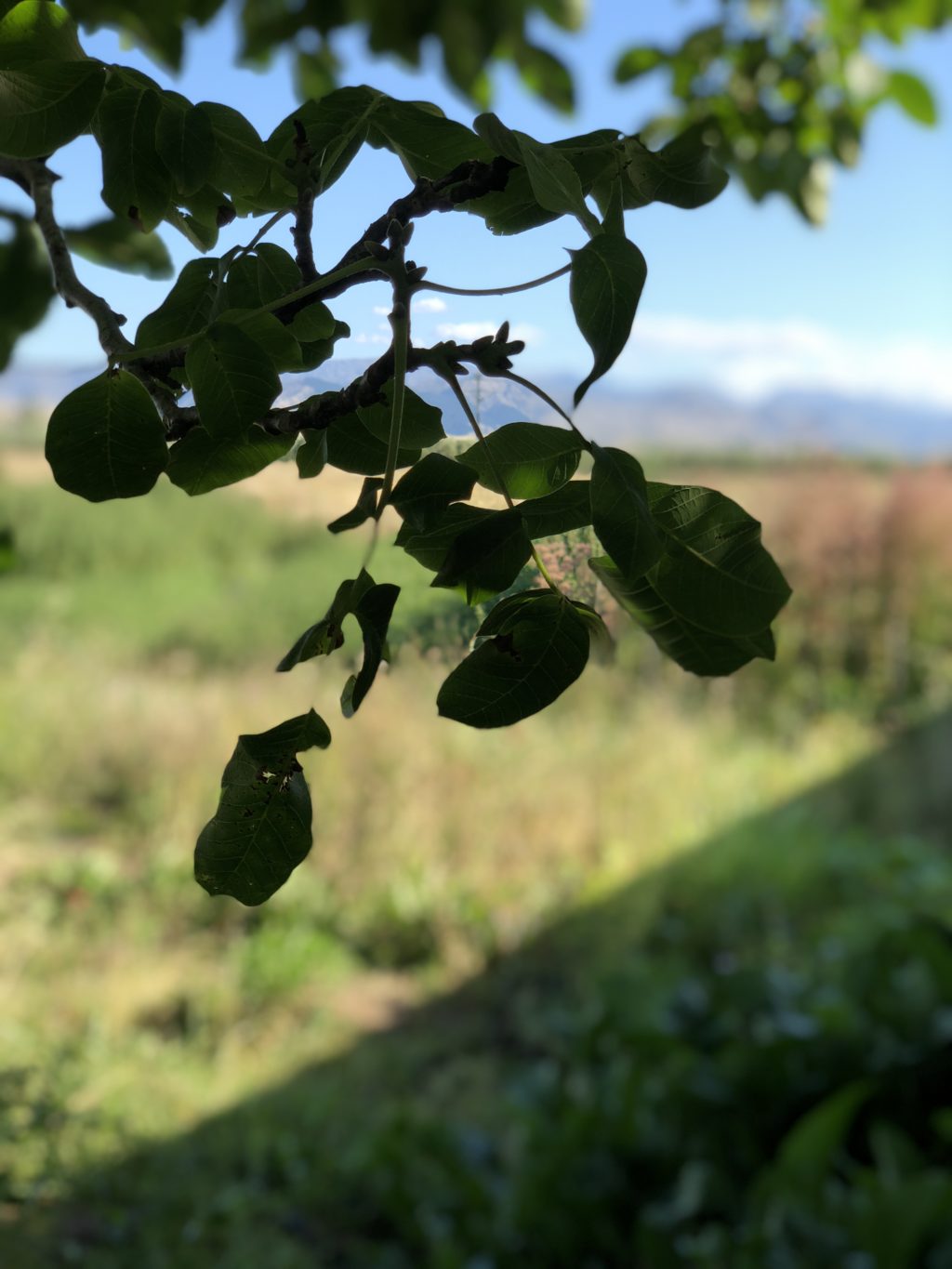 One of the striking features of Marlborough is its vast scale, but my next stop offers an alternative vision: a patchwork of small plots, encompassing an incredible 29 different varieties.

Frustrated by the cool climate of their native Switzerland, Hans and Therese Herzog arrived here in 1994, converting an apple orchard to vines. A fine dining restaurant followed a few years later and the winery, with its beautiful Mediterranean gardens, is now a destination in itself.

Organically certified, the Hans Herzog wines are innovative, small-production masterpieces, encompassing a bewildering range of varieties, with a list that reads like an encyclopaedia: from arneis to zweigelt.

French Sommelier Arthur Griffoul shares his expertise with me, for a comprehensive, multi-vintage tasting, from which these would be a select few of many highlights: Cuvée Therese, an innovative zero-dosage sparkling wine, with mouthwatering fresh alpine strawberries and pink grapefruit; an elegant pinot gris, rose gold in colour, from 20% skin contact, with ripe peach balanced with crisp apple acidity; the rounded, lightly-oaked, bees waxy, stone fruit viognier; and the St Laurent, with its wild yeast fermentation and 30 months on lees, delivering fifty shades of cherry.

Hans tends to the vines, with a mix of organic ‘teas’, made from macerated herbs and essential oils, and the resulting wines all seem to sing of purity. 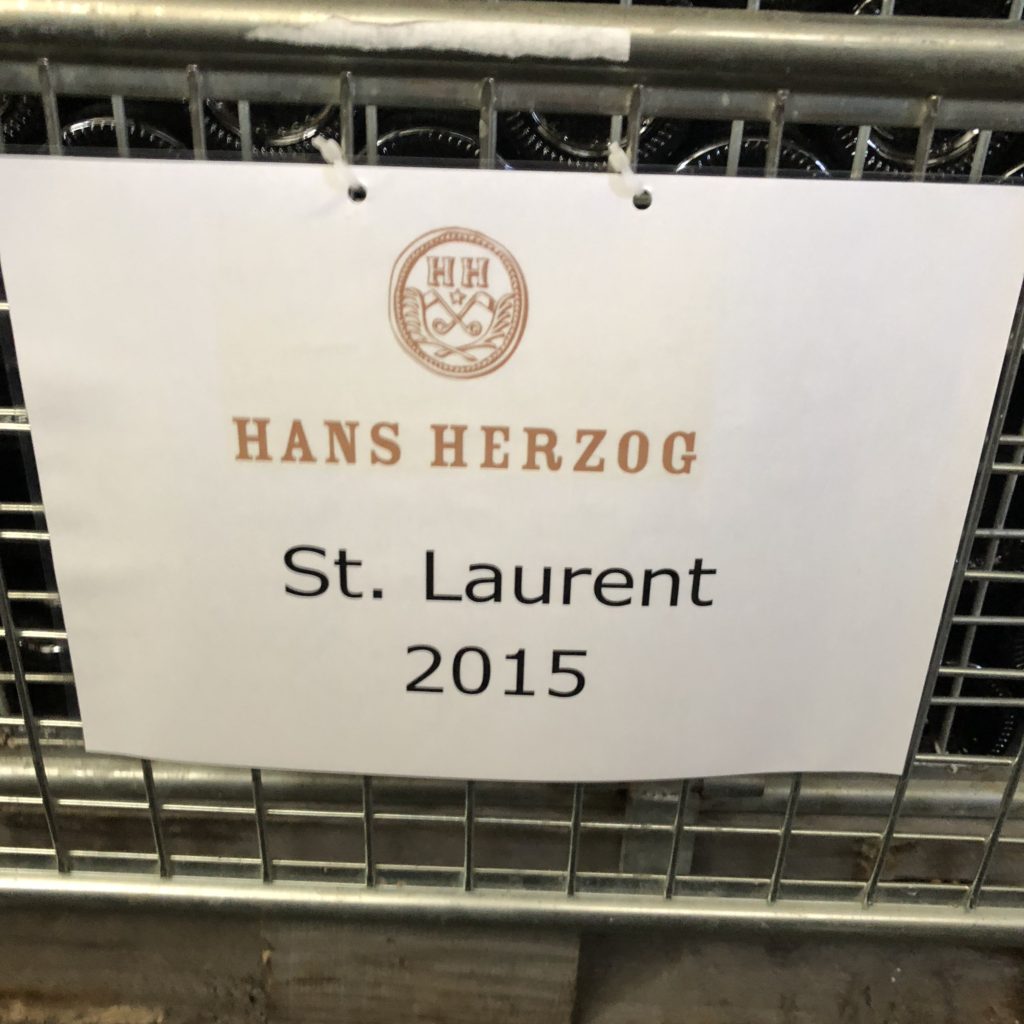 With its blue skies, sunshine and broad alluvial plains, this is a good place to try farming naturally, in tune with nature, without the aid of fertilisers and pesticides.

That’s a passion for movie director of photography, Michael Seresin, whose credits include Harry Potter, and whose wines are now finding the same fame, with their focus on expressing a sense of place. Certified organic and biodynamic, the set up here is simple and charming.

There’s a ‘dynamiser’ to spin a stinky green tea …

I’m shown around by deputy winemaker Jordan Hogg and Krystal Palmer, who’s just moved from the vineyards into the winery. It’s a crash course in biodynamics, from the complex calendar – which determines when sowing, pruning, harvesting and winemaking should happen – to the rustic simplicity of the ‘cow pat pits’, where manure is rotted, to fill cow horns destined to be buried in the ground. There’s a ‘dynamiser’, to spin a stinky green tea that will be sprayed onto the vines and there’s a greenhouse to grow flowers for complementary planting. 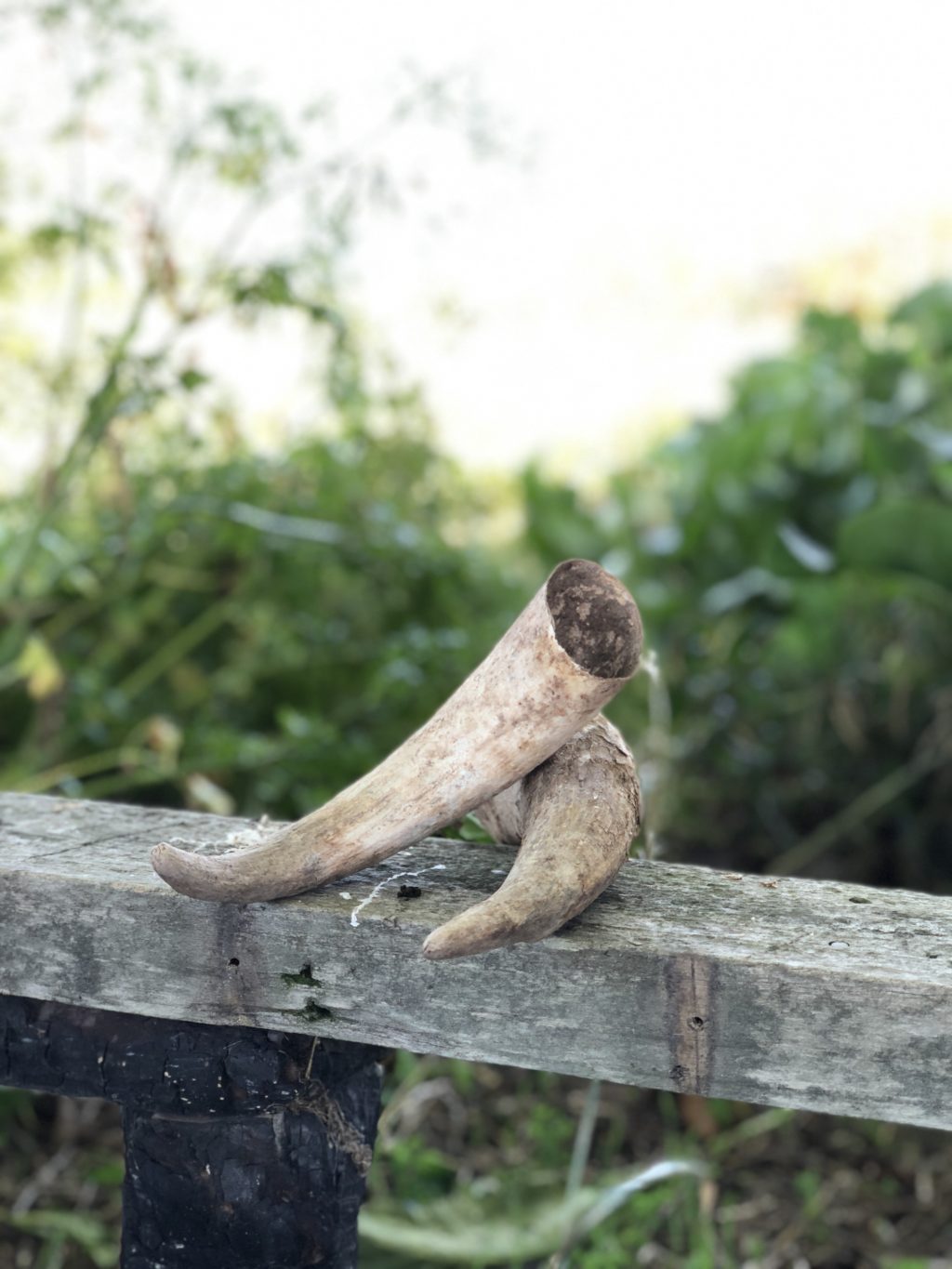 There’s an appealing, relatively inexpensive range of entry levels wines, all branded Momo – meaning ‘offspring’ in Maori – and a premium selection including ‘Marama’, meaning ‘moonlight’, a barrique-aged sauvignon blanc, at the chardonnay-end of sauvignon, with its complex citrus, coffee grinds and honeycomb character; and an elegantly-crafted Reserve chardonnay, which has 11 months in barrique and then six months in a 500-litre puncheon, resulting in a creamy, rich, complex wine. 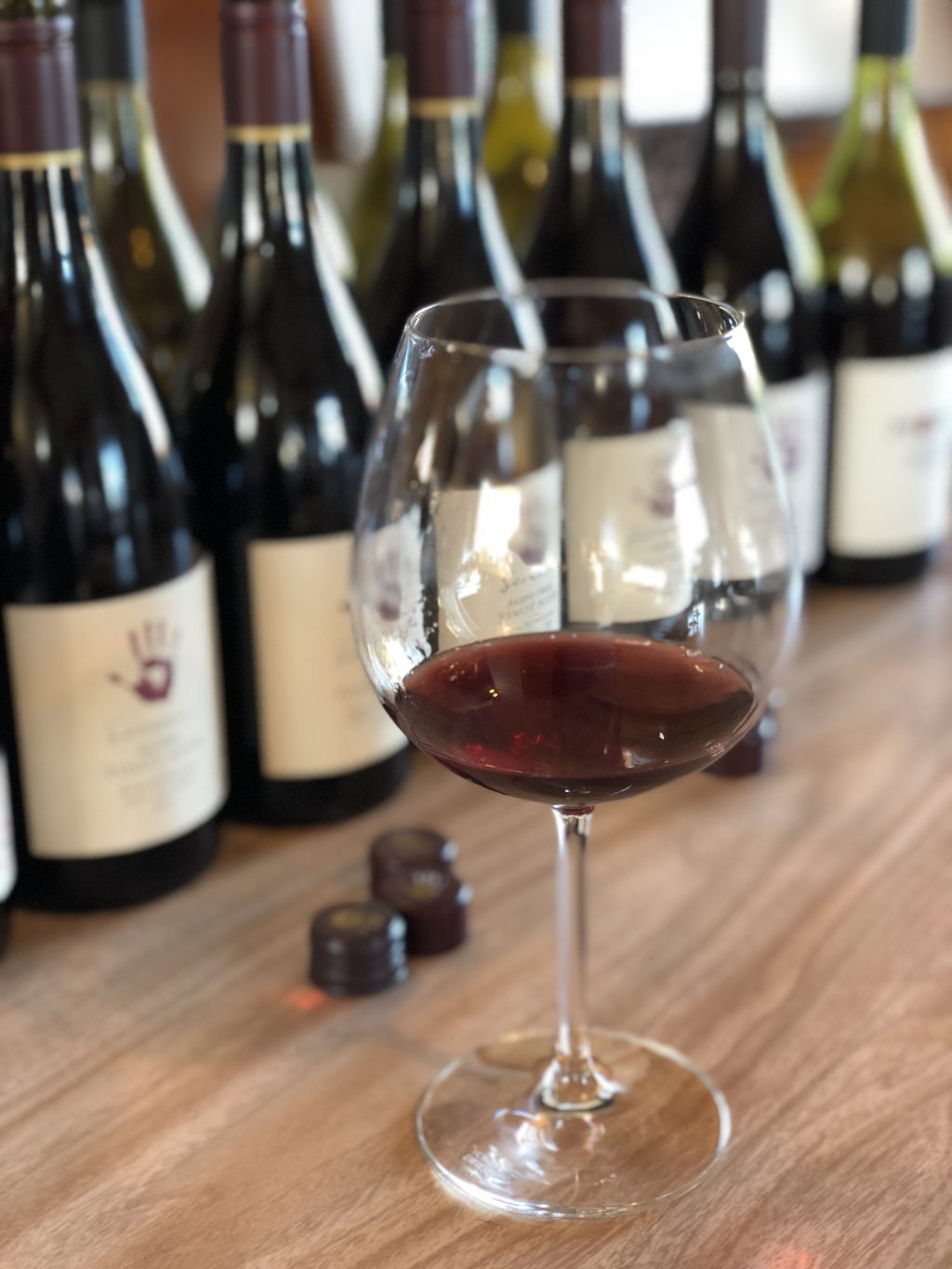 The fun really starts with the pinot noir collection, where there’s an array of different wines, with a focus on individuality. They are all excellent, but my favourites are at two distinct price points: at the more affordable end, there’s ‘Leah’, named after Michael’s daughter who’s an ambassador for the brand in the UK. A blend of 3 plots, it’s a bright, slightly savoury mix of redcurrant, red cherry and sensuous spice. At a higher price, there are the single vineyard wines, including the critically-acclaimed ‘Noa’ and my favourite: ’Tatou’, cropped to produce a mere bottle, per vine, resulting in intense notes of hedgerow fruit, tomato leaf and ripe raspberry, with savoury complexity, smooth, fine-grained tannins and a long finish.

Until tonight, I hadn’t realised that the biodynamic calendar also determines when we should drink: the same wine can apparently taste different according to what day it is.

Leaving Seresin, it feels apt that the moon is clearly visible. Marlborough’s surrounding mountains look eerie under the night sky and I have a feeling Central Otago will bring more nocturnal spectacle.

UK stockists: see my suggestions after the last article in the series