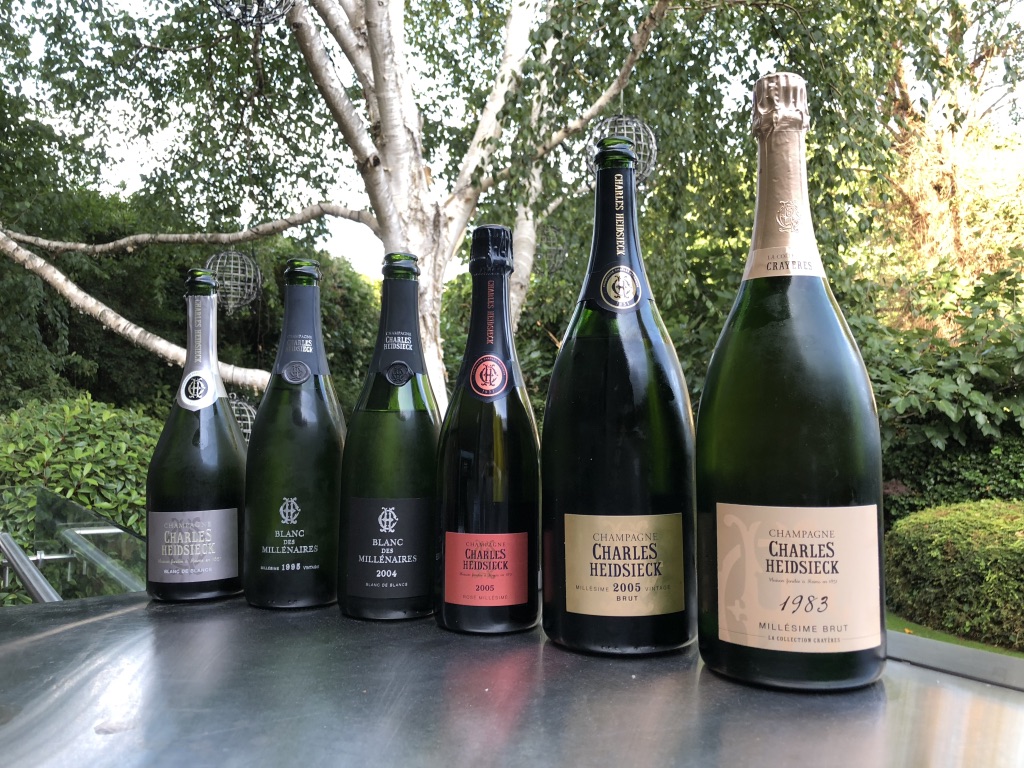 This is a piece I wrote for The Buyer, re-versioned slightly with a link to The Finest Bubble added at the end:

Colleagues used to call me ‘Champagne Charlie’ when I worked for the BBC.

It wasn’t intended as a compliment.

Little did I realise ‘Charlie’ was no mythical bon viveur, he was actually a real person: the enterprising and extraordinary Charles Heidsieck, who earned his moniker introducing America to Champagne in the latter half of the nineteenth century.

I love bubbles and fortunately there is no shame in being a ‘Champagne Charlie’ in the wine world. So it was with something resembling rapturous pleasure that I accepted an invitation from the boss of The Finest Bubble, Nick Baker, to attend a vertical tasting of ‘Charles’, with its Director Stephen Leroux, a Frenchman born in Scotland, whose fluent English is delivered in a hybrid accent that could be described as ‘Frottish’.

Baker shall henceforth be known as ‘Champagne Nick’, for his passion and knowledge of all things autolytic. Having built a sizeable investment portfolio of fine Champagnes, he needed to do something with his bounty, other than drink it. Thus, in 2014, The Finest Bubble was born, offering what’s sometimes referred to as a ‘Champagne Emergency Service’ (don’t you just love the idea of a Champagne emergency?), but is better described as a purveyor of high-end gifting. The company boasts an extensive portfolio, with the USP of two-hour delivery in London, and a great website with lots of detail for the enthusiast. It recorded forty per cent growth last year, with a turnover of more than a million pounds, and is on course to do even better in 2018. 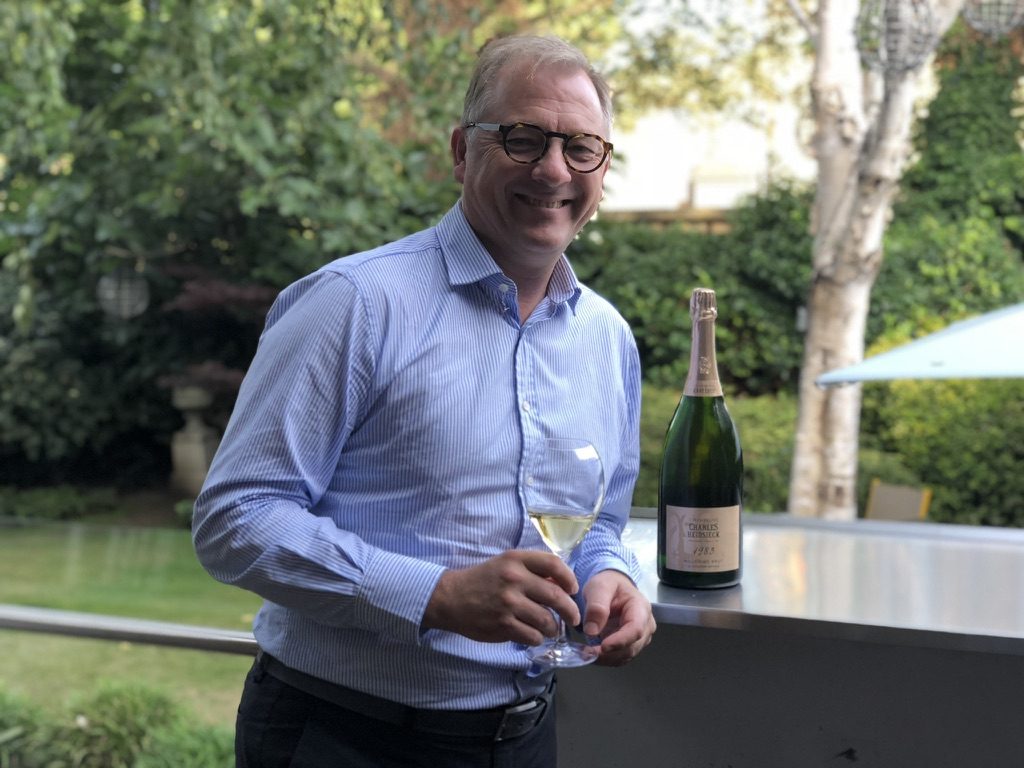 Champagne Nick was our host for a special supper at Frederick’s in Islington, focused at loyal customers and tailored to six cuvées, with Leroux (pictured above) on hand to elaborate on each and add some historical perspective.

Of the three houses with Heidsieck in the name, all originating from members of the same family, ‘Charles’ is the smallest and arguably the finest. Now owned privately by the Descours family, who also control Piper-Heidsieck, the brand was until 2011 part of Remy Cointreau. Struggling to define itself as part of a bigger group, ‘Charles’ saw its sales slide and its prestige marques all but vanish in the early part of this century, until the change in ownership and the installation of Leroux as boss. His first year was the company’s worst, for turnover, but since then there has been double-digit annual growth, fuelled by the careful selection of distributors – Liberty Wines in the UK – and a focus on specialist retail and the on trade. More importantly, there has been critical acclaim for the Champagnes, which you won’t find in a supermarket.

Despite being one of the first houses to produce a Blanc de Blancs, it was only relaunched this year, after being inexplicably abandoned sometime around the late 1980s. Charles Heidsieck Blanc de Blancs NV (RRP £75) is most definitely welcome back! With a base of 2012, around twenty-five per cent reserve wines, and four years on lees, this was elegant and taut, with attractive tiny bubbles, a charming nose of stone fruit and citrus zest and a palate reminiscent of freshly baked crumbly lemon shortbread providing a surprisingly long finish. 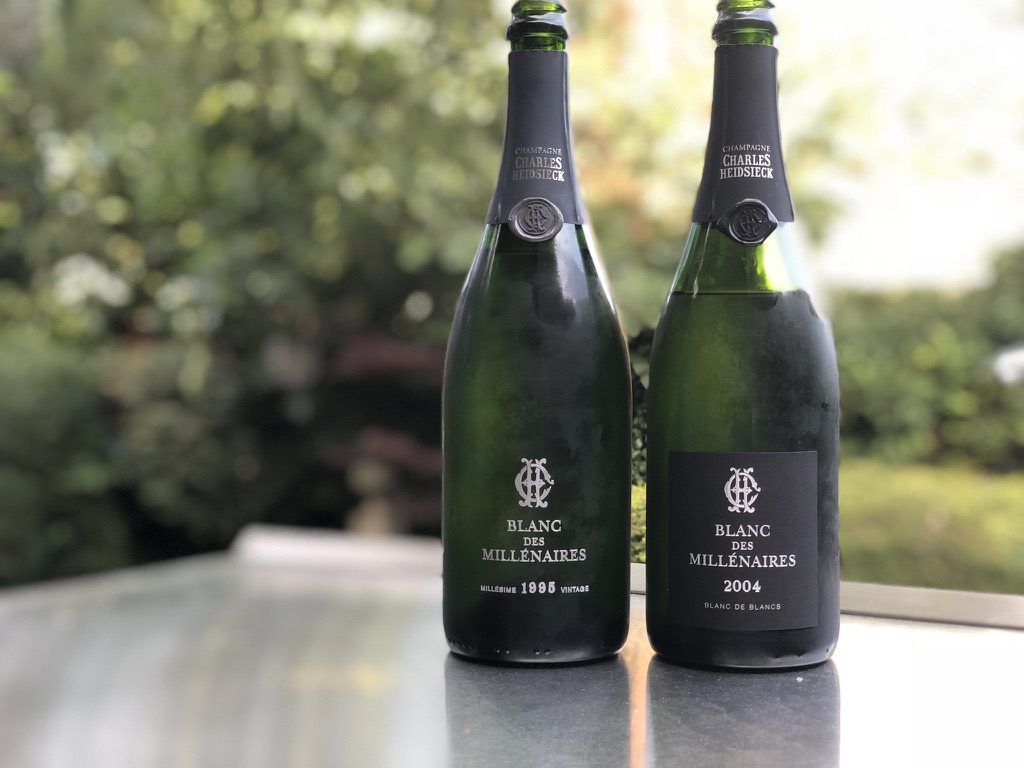 The Chardonnay focus continued, with a vintage duo, nine years apart, to pair with our crab, prawn and avocado starter. Charles Heidsieck Blanc des Millénaires 1995 (RRP £195) was disgorged in spring 2014 after fifteen years on lees. Selected from four Grand Crus and one Premier Cru, this is obviously a library wine, with plenty of dried fruit and caramel character, yet it still felt fresh with yellow apple, ginger and citrus, tension and a sense that it has further to go. Outshining it slightly, the Charles Heidsieck Blanc des Millénaires 2004 (RRP £175) felt vivaciously young, with the joyous air of an orchard full of ripe apples, followed by a refined buttery complexity, a gentle smokiness and a lingering sense of generosity.

A main course of lightly chilled organic Scottish poached salmon with potato salad and broad beans delivered a surprise, hitting it off with what was arguably the counter-intuitive partner. Champagne Nick had expected it to pair best with Charles Heidsieck Rosé Millésime 2005 (RRP £85). There’s no denying it was a lovely match with the elegant and smoky alpine strawberry character of the rosé, seventy per cent pinot noir, eight per cent red wine, which enjoyed eleven years of lees ageing. However, the salmon’s true love was actually the outstanding Charles Heidsieck Brut Millésime 2005, in magnum (RRP £160). Intense and gently smoky, with eight years on lees and four years bottle ageing, this blend of sixty per cent Pinot Noir and forty Chardonnay, did its best to steal the show, with a rich, fresh, salinity and depth that prompted a brief reverential silence.

Finally, it was the turn of the venerable Charles Heidsieck Brut Millésime 1983, in magnum (RRP £550). Champagne Nick tried to tell us that this came from the year he was born, valiantly rising above the laughter that followed. Part of the ‘Collection Crayères’, a late release of vintages from the company’s historic cellars, this was one of only 120 magnums made available, six of which were purchased by The Finest Bubble.

Disgorged in March 1999, after fifteen years on lees, the dark golden colour suggested it might be dominated by tertiary characters. There was certainly nuttiness, leather, forest floor and mushrooms, but it remained surprisingly fresh, laser sharp and, of course, utterly delicious. It made me think of Christmas, with complex tangerine, smoky orange and spice flavours.

Interestingly, all the Champagnes we tried had been opened at least an hour beforehand – something else counter-intuitive, which Champagne Nick heartily recommends. And he would know.

As to the future, describing the 1983 as “a gentle flower that opened a bit, then opened a bit more”, Stephen Leroux assured us the ‘collection concept’ for late releases would deliver further such surprises for the Champagne Charlies of the world, from deep beneath the streets of Reims.

To find any of the Champagnes we sampled: https://thefinestbubble.com/champagne/brands/champagne-charles+heidsieck